Everything Dinosaur team members have received a number of requests to post up further pictures of the dinosaurs that make up the new for 2014 Papo mini dinosaurs tub.  This miniature model set features six prehistoric animals, namely T. rex, Spinosaurus, Stegosaurus, a raptor (presumably Velociraptor), Triceratops and a Brachiosaurus. 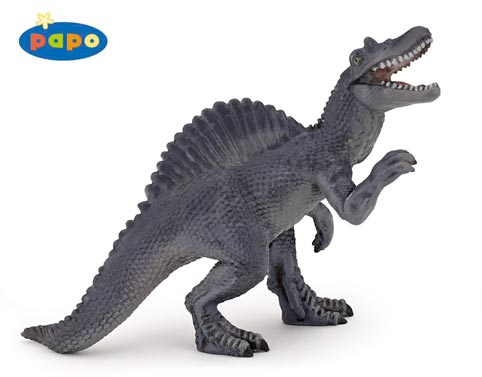 These two carnivores are extremely popular with young dinosaur fans, in fact Spinosaurus and Tyrannosaurus rex featured in the top two in Everything Dinosaur’s 2013 survey of the most popular prehistoric animal models in the fossil record.

To read about the survey: Top Ten Most Popular Prehistoric Animals Survey.

Intriguingly, the dinosaurs represented by this set of mini dinosaur figures made up the top six in Everything Dinosaur’s annual census.

The “Raptor” Model in the Set Note the sickle-shaped claw which is raised on the hind feet.

One of our favourites in this set and the first of three herbivores that we will feature here is the cute Stegosaurus. The mini Stegosaurus from Papo.

This model has a lovely quizzical expression.  Not sure what our walnut-sized brained stegosaur is thinking but we really like the cute expression on his face. These models will be sold as a set in a clear, plastic tub which also makes a handy storage jar for when it is time to put these models away for the night.  Last but not least, comes the chunky looking Brachiosaurus.  It has been suggested that since Papo already makes larger versions of these dinosaurs, these particular replicas could be used to represent babies or juveniles of the species. This mini dinosaurs model set is likely to be available in the second quarter of 2014.  A spokesperson for Everything Dinosaur stated that although production schedules were subject to change, it was anticipated that this model set would be available sometime around late May or June of this year.

To view the range of Papo prehistoric animal models in stock at Everything Dinosaur: Papo Prehistoric Animal Figures.