Everything Dinosaur – Trust Us to Deliver

Everything Dinosaur has thousands of customers and ships dinosaur models and prehistoric animal merchandise to over a hundred countries. We have a 5-star service rating and award-winning customer service and as part of website updates and improvements we will be emphasising this on the home page.

Team members have been busy creating a small logo to emphasis our trusted delivery service and here is one of the designs that we have come up with.

“We can use the “e” from our logo and trademark to create the wheels for our delivery vehicle and we designed a dinosaur driver in keeping with the theme of our website. It was just for a bit of fun, but we do take our award-winning customer service and our excellent record for shipping overseas, extremely seriously.”

The updated and improved Everything Dinosaur website is currently undergoing testing and it is hoped to go live later in the summer (2022).

Everything Dinosaur specialises in the sale of dinosaur and prehistoric animal models and figures. Working in association with museums and other related educational bodies the UK-based company aims to create a marketplace for accurate, exciting, imaginative and educational products.

It’s time for our websites to get some tender loving care.  Tomorrow morning (January 20th 2021), the main Everything Dinosaur website: Everything Dinosaur is going to be unavailable for a short while whilst our hardworking and dedicated engineers perform some essential maintenance.  The work is scheduled to start at 8am GMT (9am ECT, 3am EST) and it is likely to take around two hours to complete.  We apologise for any inconvenience this will cause.

Our Hardworking Dinosaurs Will Carry Out Essential Maintenance and Upgrades

The Everything Dinosaur website will be unavailable for a short time on Wednesday 20th January 2021 from 8am GMT (9am ECT, 3am EST) as we undertake updates and essential maintenance.

A spokesperson from the UK-based company stated:

“We need to place our main website into maintenance mode to permit our engineers and technicians to incorporate updates and transfer the website over to a new server.  We have planned this maintenance for some time but given the number of site visitors and orders that we receive, the difficult thing was to try to schedule the transfer that would cause the least amount of inconvenience to our loyal customer base.  Our blog site has already been transferred over, the change of servers was carried out successfully.”

As part of its commitment to customers, Everything Dinosaur strives to ensure that the sites that it managers are always in tip-top condition, with thousands of dinosaur and prehistoric animal models in stock, our very own version of “Jurassic Park” was in need of a spring clean.  All should be back to normal by mid-morning (GMT) tomorrow.

The spokesperson from Everything Dinosaur added:

“Once again we apologise for any inconvenience this planned maintenance might cause, but please be assured this work is necessary and as a result we will be able to add even more prehistoric animals to our range and offer even better service to our customers.”

Maintenance Scheduled on Everything Dinosaur’s Websites

Everything Dinosaur’s websites are scheduled for routine maintenance and upgrades this weekend (Friday/Saturday 26th/27th June 2020).  As a result of this work, some visitors to our sites might experience a slight slowing down in our website performance and speed.  The work has been scheduled for a time when traffic to our three websites is at its lowest, Everything Dinosaur doing all it can to minimise any inconvenience to our customers.

“Late this Friday or in the early hours of Saturday morning (BST), [June 26th/27th 2020] the servers that host Everything Dinosaur’s websites are undergoing some essential maintenance and updates.  During this time visitors to our websites, might experience a slowing down in the speed of our sites.  We apologise in advance for any inconvenience caused.”

Everything Dinosaur team members recently announced what new prehistoric animal models will be brought out by Papo in 2020.  In total, six new models will be introduced next year, five dinosaurs: New Papo Dinosaur Models for 2020 and for us, the stand out figure from Papo for 2020, a replica of Megaloceros New Papo Megaloceros.

Today, we publish details of those prehistoric animal figures that are being withdrawn.  Being notified about retiring figures is important to collectors, with such a notice they can secure a model for their collection before they become too rare and difficult to obtain.

In 2020 Papo will retire the following: As Papo develops a number of colour variants, then the original figures are very likely to be retired shortly afterwards.  The original Papo Parasaurolophus will be replaced by a new colour variant in 2020 and is already out of production.

The Original Papo Parasaurolophus Model is Being Retired 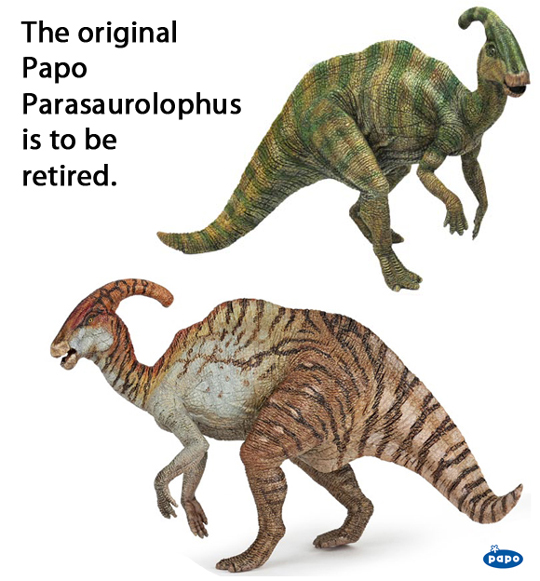 The original Papo Parasaurolophus (top) is being replaced by a new colour variant (bottom) in 2020.

The new Parasaurolophus has certainly got a striking colour scheme, but many model collectors and fans of Papo will miss the original version with its more muted colours and tones.

The Papo Baby Pachycephalosaurus dinosaur model is also being retired and production of this model has already ceased.  Readers of this blog might have suspected that this figure was under threat when Everything Dinosaur released news of the introduction of a new “bonehead”, a replica of Stygimoloch , which is likely to be available in the late summer/autumn of 2020.

In addition, the original feathered Velociraptor model, released in 2016 is also being retired.  It too is being replaced by a new colour variant. “We can now reveal which models are being retired from the Papo Les Dinosaures range.  By releasing this information now, model collectors still have the chance to acquire these figures before they become subject to inflated prices as found on internet auction sites.”

Everything Dinosaur still has stocks of these figures available, they can be found here: Papo Dinosaur and Prehistoric Animal Figures

Regular visitors to Everything Dinosaur’s main website (Everything Dinosaur), will notice some subtle changes to the theme and the website’s framework.  Customers can still expect our award winning 5-star service, that has not changed, nor have we reduced the range of dinosaur and prehistoric themed products that we stock, however, our use of sliders and animation has been reduced to help maintain fast page load times when our site is viewed on mobiles and other devices.

Constantly Working to Improve our Customer’s On Site Experience

Team members at Everything Dinosaur are constantly working to improve and enhance the experience visitors and customers have when they visit our websites.  Making such improvements are part of a long-term and on-going programme of investment to help this UK-based company stay ahead of the curve when it comes to technical developments.  After all, with our knowledge of the Dinosauria, we don’t want Everything Dinosaur going extinct!

The changes we have made will have no bearing on how the site is viewed.  It will have no impact on the site pages, all the customer benefits are retained, the changes just permit those visitors using mobiles and other devices (not viewing the site from a personal computer), to have slightly quicker load times, for the pages that they wish to view or the landing pages that they are directed to. The functionality of the website will not be affected by these changes.  The front page of our website will continue to inform visitors about new arrivals/new products and the Feefo ratings along with the chat live options will continue to be prominently displayed.  The “contact us” email link will still be accessible, but in the near future another, additional “contact us” link will be provided nearer the top of the page, just for customer convenience. “These changes are part of an on-going process to reflect changes in technology and the preferences of customers.  We continue to monitor the performance of our various websites on a daily basis and to adjust them so that we can continue to meet the needs of our ever-growing and international customer base.  The first slides we have put up on Everything Dinosaur’s home page support our work with Eofauna Scientific Research and Kaiyodo.  These slides also give us the opportunity to promote our very popular dinosaur and fossil workshops in schools.  We now have greater flexibility in the sort of slides and other visuals that we can use to keep our website refreshed and up to date.”

A Programme of Further Investment

Just like when writing a scientific paper or report, the work done so far is part of a continuing process.  As with science, things move on and the Everything Dinosaur websites are constantly being reviewed and updated to meet the changing needs of the market place. A Formidable Predator of the Middle Triassic of Brazil

Prestosuchus (P. chiniquensis) was not a dinosaur, but a member of the Archosauria, just like the dinosaurs, but from a lineage that is more closely related to modern crocodilians than to living birds and extinct dinosaurs.  Fossils of this large predator have been found in south-eastern Brazil from strata that date from the Middle Triassic.  Prestosuchus was named by the German palaeontologist Friedrich von Huene in 1942, the genus name honours Brazilian self-taught palaeontologist Vicentino Prestes de Almeida and the trivial name honours the town where Vicentino Prestes de Almeida was born (Chiniquá, Rio Grande do Sul). The Wild Safari Prehistoric World Prestosuchus model.   A close-up view of the new for 2019 P. chiniquensis model from Safari Ltd.

It had been thought that this animal measured around 5 metres in length, about the size of a Nile Crocodile (Crocodylus niloticus), however, a specimen described in 2010 indicated that this quadruped may have reached lengths of around 7 metres and it might have weighed 1,000 kilograms or more.  Everything Dinosaur team members have had to examine a number of scientific papers in order to produce a scale drawing for use in their Prestosuchus fact sheet.  This fact sheet will be sent out with purchases of the Prestosuchus model.

To read an article from Everything Dinosaur published in 2010 that describes the discovery of this new, larger fossil specimen of Prestosuchus chiniquensis: The Most Complete Fossil of a Crocodylotarsian found in Brazil