The latest edition of “Prehistoric Times” magazine has arrived at Everything Dinosaur’s offices.  The nights might be drawing in and we may all have a long, dark winter ahead but this magazine is a bright spot in otherwise difficult times.  The front cover features an amazing illustration from Mark Hallett, an American artist whose work has graced many a front cover of this quarterly magazine.   His latest contribution features a cave bear defending her cub from a marauding sabre-toothed cat.  The famous palaeoartist created a model of the animal’s skeletons from which he first produced a pencil catch before finalising his artwork, which was painted specially for “Prehistoric Times”. 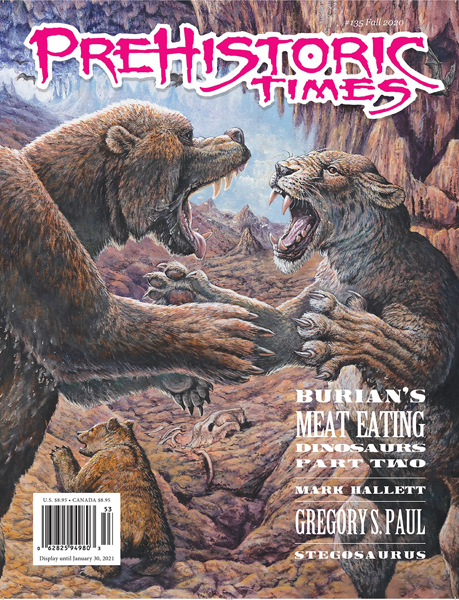 Inside the magazine, readers will discover that Mark has penned two articles, a feature on Steppe lion extinction in Europe and a beautifully illustrated piece that discusses interactions between carnivores that shared caves during the Pleistocene Epoch.  The magazine also includes a special feature on the Dutch artist Esther van Hulsen, illustrated with plenty of examples of her work as a professional wildlife and palaeoartist.  Tracy Lee Ford sets out to inspire the next generation of illustrators with a well-crafted contribution that considers how to draw Ankylosaurus, readers can expect plenty of pointers when it comes to recreating scutes and dermal armour.

Fans of earlier palaeoartists can sink their teeth into the second part of an exploration of theropod illustrations by John Lavas.  As well as documenting some of Burian’s famous artworks there is a helpful introduction that outlines the main components of the Theropoda.  It is thought that Burian was ambivalent towards illustrating tyrannosaurs.  Although much of his theropod illustration work undertaken is now considered outdated, Burian’s work was widely copied.

The Illustration of Tarbosaurus bataar by Burian (1970) An illustration of the Asian tyrannosaur Tarbosaurus bataar (Burian 1970).

The autumn edition also includes special features on Stegosaurus and the hardy dicynodont Lystrosaurus.  Our congratulations to Marcus Burkhardt and Elvind Bovor for their Stegosaurus drawings and to John Sibbick and Chuck Egnaczak for their Lystrosaurus illustrations.  The prose for both articles was penned by the ever reliable Phil Hore.

A prehistoric pig, a very successful synapsid reptile.  A model of the hardy Lystrosaurus.

There is certainly much to be admired in this edition of “Prehistoric Times”, from the latest news related to palaeontology to a Smilodon model build inspired by the cinema (Bruce Horton) and an overview of the “Jurassic Park” inspired work of Ted Brothers.  This is an excellent magazine and a welcome addition to our autumn reading material.