PNSO have added another replica of a famous North American duck-billed dinosaur to their mid-sized model range.  Recently, Everything Dinosaur revealed that a Lambeosaurus was being introduced.  Today we announce a figure named Caroline the Corythosaurus.  It has been revealed this morning with Everything Dinosaur and PNSO co-ordinating the release of images of this, the latest edition to the PNSO prehistoric animal model portfolio.  Everything Dinosaur will be stocking this model and we hope to announce very soon when this model will be available. This beautifully designed hadrosaur with its long slender legs gives the impression of a very graceful dinosaur.  The proportions of the forelimbs in relation to the hind legs reflect the extensive fossil material associated with this genus.  Regarded as a facultative biped (walking on all fours, but capable of adopting a bipedal stance when required, for example to flee from a predator), this dinosaur is estimated to have weighed more than three tonnes and reached a body length in excess of nine metres. 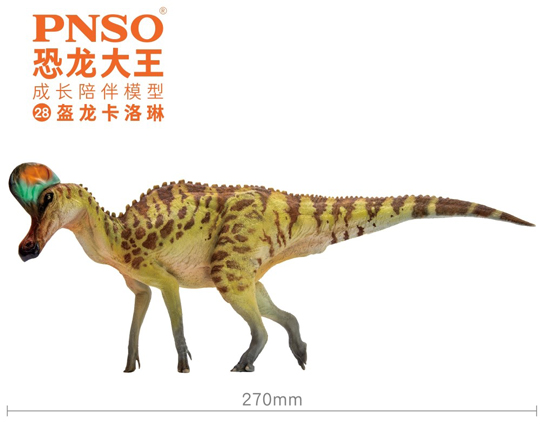 The PNSO Caroline the Corythosaurus dinosaur model is approximately 27 cm long and that beautiful “helmet” is around 10.5 cm off the ground.

As the PNSO Caroline the Corythosaurus measures approximately twenty-seven centimetres long, it can be suggested that this figure is in approximately 1:33 scale, although PNSO does not officially declare a scale for their mid-sized model range.

A Stunning Replica of “Helmet Lizard”

The first species of Corythosaurus (C. casuarius), was formerly named and described in 1914 (Barnum Brown).  It is known from numerous skeletons including complete skulls, all of which are associated with Late Cretaceous (Campanian faunal stage) strata of Alberta, Canada.  That famous semicircular skull crest has been painted a combination of seafoam green and orange.  This is a stunning replica of “helmet lizard”. A close-up view of the carefully crafted head of the PNSO Corythosaurus dinosaur model.

Eagle-eyed dinosaur model collectors will note that this model is number 28 in the series, whereas Gaoyuan the Microraptor, which will be available from Everything Dinosaur around mid-November is model number 29.  The PNSO Tuojiangosaurus replica we announced on October 16th, 2020 is model number 34.  From this, it can be deduced that more PNSO models are likely to follow.  Rest assured model collectors, Everything Dinosaur team members will do their best to keep you up to date with new PNSO figures.

The Packaging for the New PNSO Corythosaurus Dinosaur Model The packaging for the PNSO Caroline the Corythosaurus dinosaur model.

Everything Dinosaur will be providing more information about when this exciting new figure will be in stock.

In the meantime, to view the current range of PNSO figures: PNSO Age of Dinosaurs Models and Figures.