Bordering the land-locked Caspian sea to the west, Kazakhstan to the north-west, Uzbekistan as well as Afghanistan and Iran, the central Asian state of Turkmenistan has been a part of the world largely out of bounds to western scientists.  However, tucked in the eastern corner of the country, close to the border with Uzbekistan is the visually stunning  Koytendag National Park, an area known for its caves, spectacular mountain scenery and waterfalls.  The Park is also one of the most important locations for ichnologists in the world.

Ichnologists study trace fossils, most notably footprints and tracks, for preserved in the rocks that make up an area of the Park, are thousands of dinosaur footprints.  The area is known as the “Plateau of the Dinosaurs” and so perfectly preserved are the prints, they look like they were made just yesterday.  The fossilised tracks have been dated to the Upper Jurassic.  Although, this part of Turkmenistan is semi arid, 150 million years ago, it was a lush, tropical paradise that teemed with life and there were many different types of dinosaur inhabiting the area.

The location is regarded as one of the most important vertebrate trace fossil assemblages anywhere in the world, but it was not until the latter part of the 20th Century that scientists from outside the Soviet Union became aware of them.  Locals had marvelled at the tracks for centuries, one of the villages at the foot of the plateau is Khodja Pil which in the native dialect (Turkmen) translates as “the miracle of the elephants”, local legend has it that the tracks were made by elephants that formed part of the huge army of Alexander the Great. The site which covers an extensive area, has been carefully mapped and more than 2,500 individual prints have been recorded.  There are a range of different types of dinosaur represented.  The most common ones are the prints of large herbivores, but there are several tracks of three-toed carnivorous theropod dinosaurs too.

A resident of Khodja Pil commented that:

“Steven Spielberg should have shot “Jurassic Park here.  Here the tracks of the dinosaurs are real and not made by computers.” 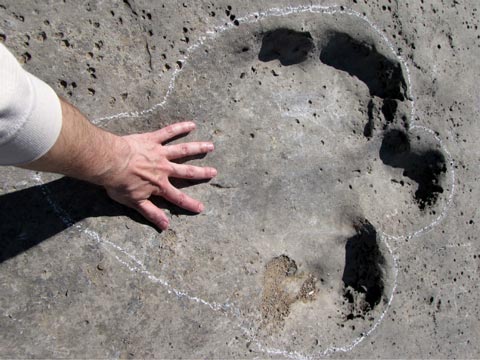 It is not only the quantity of the footprints that are of fascination to palaeontologists.  The area has some of the longest continuous lines of footprints made by dinosaurs to be found anywhere in the world.  Individual tracks can run for over two hundred metres.  Such tracks enable scientists to study Dinosauria locomotion and even behaviour can be inferred from the prints.

Anatoly Bushmakin, a Turkmen scientists who along with colleagues has been studying the fossils explained how the tracks were formed:

“Some 145-150 million years ago, [Upper Jurassic], there were lakes and marshes and herds of dinosaurs strode along the banks.  There were both vegetarian and carnivorous dinosaurs.  This sandy marshland quickly silted up and so these prehistoric tracks left their mark forever.”

The site is remote and only a handful of foreign tourists visit this location each season.  The United Kingdom Government provides advice on visiting Turkmenistan and there are a number of extreme sports and extreme off-roading companies that offer tours.  Visiting this border region requires a special permit. Turkmenistan officials are optimistic that the Park could become a major tourist attraction which would help to boost revenues for the country’s exchequer.  To this end, the Ministry of Tourism is preparing a submission to UNESCO to have the Koytendag National Park declared a world heritage site, on a par with the Great Barrier Reef of Australia or our own “Jurassic Coast”.

We at Everything Dinosaur wish the authorities well in their campaign, but we do urge caution.  Opening up such a remote part of the world can bring problems and it would be essential to ensure that the environment is protected and that visitor numbers to view the dinosaur tracks are managed appropriately to ensure the site is properly preserved.