Red Plates on a Stegosaurus

Red Plates on a Stegosaurus

A Life Reconstruction of the Armoured Dinosaur Stegosaurus 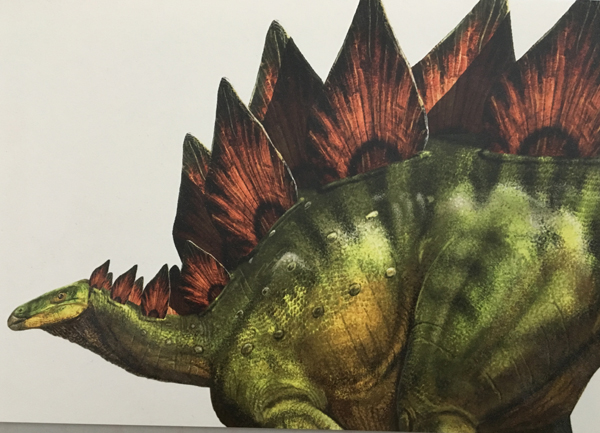 What Colour were the Plates on Stegosaurus?

When first described by the American palaeontologist Othniel Charles Marsh in 1877, the bizarre plates of Stegosaurus were thought to provide protection against attack.  They were regarded as armour, however, it was soon noted that although their exact position in life was difficult to determine (the plates are embedded in the skin and not attached to the bone), it was likely that these structures were too high on the back to be effective armour-plating for this plant-eating dinosaur.  As palaeontologists employed more sophisticated techniques to study these plates, it was revealed that they were quite thin with lots of blood vessels running through them.  The theory that these plates played a role in thermoregulation was postulated.  On cold mornings a Stegosaurus could face towards the sunrise and warm its plates.  The blood running through the vessels close to the surface of the plates would then be warmed up, helping the dinosaur to raise its body temperature.  Furthermore, in order to cool down, the Stegosaurus could face the sun in such a way that only a small surface area of the plates was exposed, thus permitting the body to cool down.  As the largest plates were high on the animal’s back, their position several metres in the air, would permit cooler air away from the ground surface to circulate around them, thus cooling the dinosaur still further.

It was the scientist Kenneth Carpenter who first proposed that the plates could be flushed with blood at will and this led to the idea that these adornments could be used to display or to intimidate predatory dinosaurs.  As a result, numerous Stegosaurus illustrations and indeed models, have tended to give Stegosaurus some reddish colour plates.

A Model of a Stegosaurus (Bullyland Stegosaurus) with Red Coloured Plates As for the colour of Stegosaurus plates, when they were not being flushed with blood, nobody knows.