Everything Dinosaur and the Rebor Dinosaur Foetuses

Coming into Stock at Everything Dinosaur the Rebor Oddities Tyrannosaurus Foetus Ever since Michael Crichton’s highly influential novel “Jurassic Park” was first published (1990), subsequently made into a film three years later, fans of dinosaurs have been trying to get hold of replicas of pre-hatched dinosaurs as envisaged by the scientists at the bioengineering company InGen run by industrialist and billionaire John Hammond.  The clever design team at Rebor have come up with their own take on this concept, portraying the foetuses of two iconic Late Cretaceous theropods Velociraptor and a representative of the Tyrannosaurus genus. 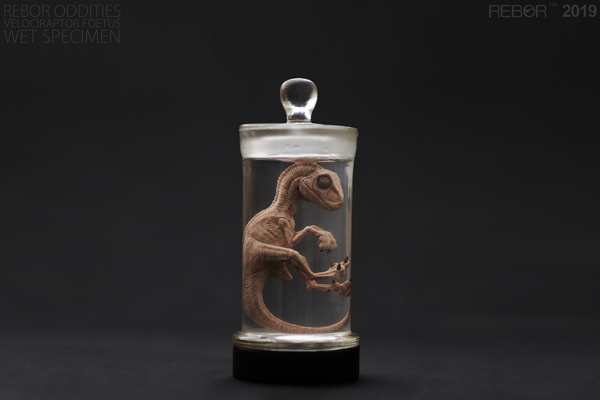 Each skilfully crafted model is displayed in its own storage jar.  The purchaser can add water to represent the fluid in which the specimen would have been kept in.  Both models reflect what is known about dinosaur embryos and show distal growth, although neither Velociraptor or any member of the Tyrannosaurus genus is represented in the fossil record by material representing a pre-hatched or recently hatched individual.

Priority reservation lists have been opened for both of these new Rebor Oddities replicas.  Dinosaur fans who had already requested to join the Rebor Dilophosaurus model reserve list “Green Day” and “Oasis”, that are due to be introduced prior to these two foetus models, have already been offered the chance to join Everything Dinosaur’s priority reserve lists.

A spokesperson for the company commented:

“These two foetus replicas from Rebor are likely to sell out fast, so we thought it fair to offer the chance to join our VIP reserve list for these two models, to those collectors who had already contacted us about the new Rebor Dilophosaurus dinosaur replicas.”

The Rebor Oddities range provides collectors with the opportunity to acquire more unusual prehistoric animal figures and replicas.  These types of models tend to sell out quickly and can rapidly become difficult to obtain.  Everything Dinosaur will be bringing into stock a limited number of these new Rebor Oddities.  As for their sizes, the Tyrannosaurus figure is slightly larger than the Velociraptor replica, a probable true reflection on the size of these dinosaur embryos from back in the Late Cretaceous.

These figures are likely to be highly sought after, demand for them could outstrip supply and at the moment, based on current estimates, a July delivery date at Everything Dinosaur’s warehouse is forecast.