The Rebor 1:18 scale Velociraptor replica, “Winston” has sold out quicker than any other model in the Rebor model range.  However, not to worry, more of these fantastic replicas are on the way and they should be in stock at Everything Dinosaur next week.  The Rebor Velociraptor figure was called “Winston” in honour of the special effects wizard Stan Winston, who was instrumental in articulating and bringing to life the Velociraptors in the first three “Jurassic Park” films.  It seems that these Rebor Velociraptors were as speedy as their on screen counterparts, they have sold out rapidly. This beautifully detailed model stands around eight centimetres high at the head and is a generous fifteen centimetres long.  It has proved to be extremely popular with dinosaur fans and model collectors who have raved about its articulated arms and the stunning detail in that poseable lower jaw.

To express interest in having a Rebor Velociraptor 1:18 scale replica reserved for you, simply email Everything Dinosaur and one of our team members will personally email you when the new stock comes in.

There’s no obligation and no need to for any payment, this is just one of the ways in which we try and support our customers. 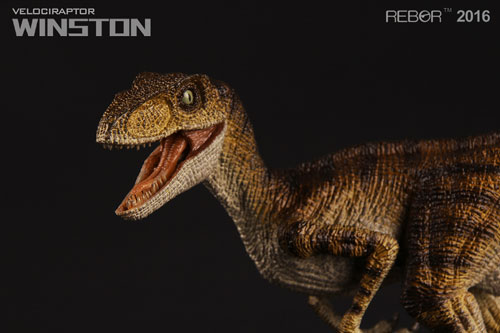 Rebor have slowly and steadily built up an exciting portfolio of prehistoric animal models over the last two years or so.  The company has produced a number of spectacular dromaeosaurid figures – the “raptors”.  Soon there will be a set of Deinonychus models available to go along with the existing Utahraptor and Velociraptor replicas.  The set of three Deinonychus models the “Cerberus Clan” will be on sale from Everything Dinosaur in November, we will post up more details about these 1:35 scale dinosaurs in due course.

In the meantime, Everything Dinosaur is interested in your feedback regarding the Rebor Velociraptor “Winston”, if you want to leave a comment about our service or indeed a review of the model itself, this is very easy to do, simply click the link to the Velociraptor product page below, and when on the page, click the orange coloured link “add your review”.

We look forward to receiving feedback.

To see the full range of Rebor models available from Everything Dinosaur: Rebor Dinosaur and Prehistoric Animal Models