A very big thank you to the many clever, creative fans of all things Cretaceous who entered Everything Dinosaur’s design your own dinosaur themed T-shirt competition.  We had no idea how powerful social media could be and thanks to all our friends on Facebook, Twitter followers and such like we were inundated with entries.

Our idea was simple, if Everything Dinosaur team members having put down their geological hammers and magnifying glasses, were working on some ideas for a range of children’s tees with a prehistoric animal theme, why not, just for a bit of fun, give budding young palaeontologists a go too.  So we posted up on our Facebook page, Blog, Twitter etc. information about the competition and offered as a prize the winning design being made up into a T-shirt – a sort of “dinosaur designer label” that would be unique to our contest winner.

We had freakish flying reptiles, cute baby dinosaurs, marauding marine monsters, Triassic terrors – all sorts of amazing drawings and pictures sent into us from all over the world.  Fortunately, those clever primates from Shirt Monkey, the direct to garment T-shirt design specialists with whom Everything Dinosaur has been working with on this project, were able to help out and after much deliberation a winning design was chosen.

One of the Many Dinosaur Themed T-Shirt Designs Received The competition was won by 12 year-old Holly who lives in France.  The winning design showed a huge dinosaur foot crushing a tea cup with the caption “T (tea) Wrecks”.  Holly’s mum contacted Everything Dinosaur and asked whether two “unique” tees could be made up as Harri, Holly’s younger sister, wanted one as well.

Holly and Harri Show Off their Winning T-Shirts “This is the first time that we have involved our social media following in a new product range launch such as this.  We had competition entries from all over the world and in addition, we got some amazing feedback as we posted up some of our own T-shirt designs and ideas.  It’s been a real consultation process and we are grateful for all the advice and feedback received.” The winning design comes off the production line.

Holly wants to be a palaeontologist when she is older, with a new dinosaur species being named every 20-30 days or so there are going to be a lot of new dinosaurs for Holly to study. A giant T. rex foot about to wreck an enormous tea cup.

The first three dinosaur themed T-shirts from Everything Dinosaur are going into production next week, and should be up on line at Dinosaur Clothing, Dinosaur T-shirts very shortly.

A Trio of Dinosaur Themed Tees 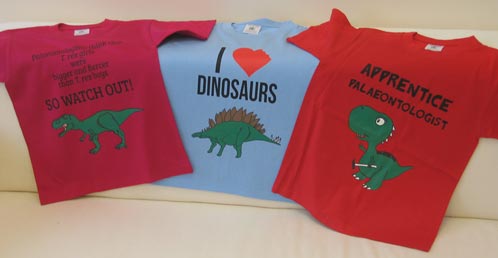 The first of the dinosaur themed T-shirts from Everything Dinosaur.

The 100% cotton T-shirts will be available in size ranges from 3-4 years up to age 9 to 11 and at each stage of the design process Everything Dinosaur consulted with its Facebook fans and social media followers to seek advice and approval for the work being done.  The use of social media has provided the company with yet more channels to build up two-way communication with its customers and fans.