A team of Chinese researchers have revealed a total of five new types of feathered dinosaur.  Nothing too surprising with this considering the rich fossil finds of the Liaoning Province, however, these new feathered dinosaur fossils pre-date Archaeopteryx fossils and prove that feathered theropods were around long before the first bird.

Archaeopteryx fossils are known from the fine lithographic limestones of Bavaria and date from approximately 150 million years ago (Tithonian faunal stage), the Late Jurassic.  These new species of feathered dinosaur have been found in two separate rock formations, the Tiajishan Formation (dating from 168-151 million years ago) and the Daohugou Formation (164 -158 million years ago).  These finds prove that there were feathered dinosaurs before birds like Archaeopteryx evolved, so it is possible that birds are the direct ancestors of dinosaurs.

Archaeopteryx displays a mix of characteristics in the fossilised skeleton that links birds and dinosaurs, it is described as a transitional fossil.  The first fossils of Archaeopteryx have played a very important role in the acceptance of Darwinism as a mainstream scientific theory.  The first nearly complete fossil of Archaeopteryx was found just two years after the publication of the “Origin of Species”.  As predicted by Darwin’s theories on natural selection, if species evolved from the passing on of favourable characteristics from one generation to another, transitional forms would be found in the fossil record.  The Archaeopteryx fossils represent such an animal – a transition between Dinosauria and Aves.

The Link Between the Dinosauria and Aves A scale drawing of the dromaeosaurid Atrociraptor marshalli.  The link between the Dinosauria and Aves.

The new dinosaur discoveries have all got feathers or feather-like structures associated with the fossil skeleton.

A Cast of a Famous Archaeopteryx Fossil 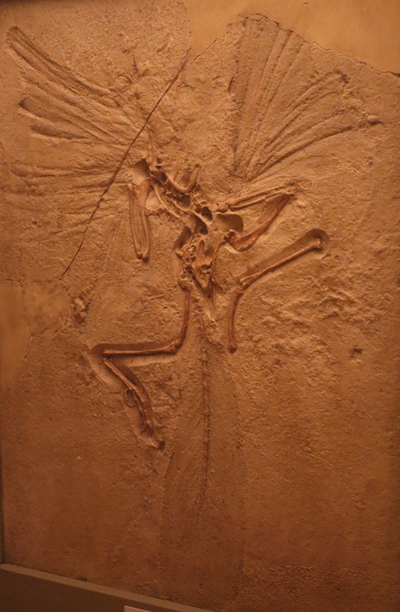 In photographs the skull can be made out in the top left corner and the dark impressions are the preserved, fossilised feathers.

These discoveries were revealed at the annual meeting of the Society of Vertebrate Palaeontologists, which was being held in Bristol.  Dr Xu Xing (Chinese Academy of Science), one of the researchers behind these new fossil finds commentated on the situation regarding the fact that until now now feathered dinosaur fossils were known that dated before Archaeopteryx.

“These exceptional fossils provide us with evidence that has been missing until now.  Now it all fits neatly into place and we have tied up some of the loose ends”.

One of the dinosaurs, named Anchiornis huxleyi, has extensive plumage and profusely feathered feet.   It has been classified as a primitive troodontid dinosaur, an animal that was feathered but could not fly.  The feathers were most probably used to keep these animals warm, indicating that many small dinosaurs were warm-blooded.  The feathers may also have been brightly coloured an perhaps used for display.

Dr Xing said these new finds had provided important new information on the origins of birds and the evolution of feathers.

Dr Xing went on to add:

“This fossil provides confirmation that the bird-dinosaur hypothesis is correct and supports the idea that birds descended from theropod dinosaurs, the group of predatory dinosaurs that include Allosaurus and Velociraptor”.

Feathered dinosaurs may have been much more common than the current evidence in the fossil record suggests.  Dinosaurs such as Velociraptor may also have been feathered.