The stunning Rebor Titanoboa Museum Class Maquette Monty Resurgent and the Rebor Titanoboa Museum Class Maquette Brian Diccus are available to pre-order at Everything Dinosaur.  These amazing models of a Titanoboa (T. cerrejonensis) swallowing a crocodilian are going into production in the next few months and both replicas are expected in stock at Everything Dinosaur sometime around quarter two of 2021. 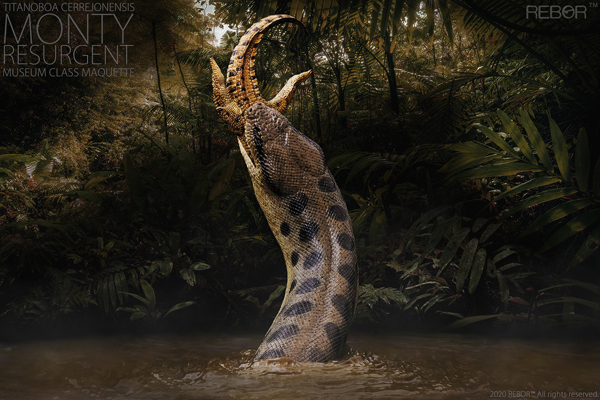 The Rebor Titanoboa Museum Class Maquette Monty Resurgent.  A stunning replica of the largest snake known to science – Titanoboa cerrejonensis complete with its unfortunate crocodilian victim which is in the process of being swallowed whole.

Hot on the Heels of Monty

This year (2020), saw the release of the limited edition Rebor Titanoboa figure “Monty”, this beautiful replica of the largest snake described to date, sold out very quickly.  Aware of how popular this prehistoric animal is Rebor have plans to introduce two more Titanoboa replicas.  Each one “Monty Resurgent” and “Brian Diccus”, will have a single production run and they are going to be made in a few months’ time.  Customers of Everything Dinosaur have the chance to secure their figures early. Pre-order Available from Everything Dinosaur

Both colour variants are available for pre-order.  Customers can choose which figure they want and then add it to their shopping cart and go through the checkout process as per usual.  However, with Everything Dinosaur, there are no fees to pay, no upfront costs, no surcharges, no deposit required.

Customers also need to note that due to the complexity of the pre-order checkout process, an order may contain only a single pre-order Titanoboa product, and no other products, pre-order or otherwise.  If a customer adds a pre-order product to a non-empty cart, the cart will be automatically emptied and the pre-order product will be added. This means that if you want both Titanoboa colour variants, customers will have to place two pre-orders (one for each prehistoric snake figure). “These are two beautifully crafted figures.  Each replica shows the anterior portions of the giant snake emerging out of the water as it gulps down its unfortunate victim.  We look forward to bringing these products into our warehouse sometime around the early summer of 2021.” The two Rebor Titanoboa figures can be found on this part of Everything Dinosaur’s website: Rebor Models and Figures.