Calculating the Size of Megalodon

Researchers from the University of Bristol in collaboration with colleagues from the University of Swansea have undertaken a detailed analysis using mathematical models and comparisons with extant shark species to provide an answer to the question – just how big was “megalodon”?  Writing in the academic journal “Scientific Reports”, the scientists set about trying to calculate the overall size and the body part dimensions of the giant prehistoric shark, an animal that is believed to be the largest macropredatory shark that has ever existed.

As a shark and therefore with a skeleton made from cartilage and not bone, body fossils are limited to the triangular teeth and to rare calcified vertebrae.  In the absence of extensive fossil material, it is very difficult for scientists to estimate just how big this predator was.  The problem is compounded when an extinct animal is considerably larger than the largest living macropredatory shark, the Great White (Carcharodon carcharias). A set of jaws from a “megalodon”  The lack of body fossils limits the ability of scientists to estimate body size.

The research team which includes Professor Michael Benton (School of Earth Sciences, University of Bristol), use the species moniker Otodus megalodon in the scientific paper.  Readers of this blog may note, that “megalodon” is listed as Carcharocles megalodon in many of our articles and indeed elsewhere in other scientific literature.  When it comes to this iconic fish, a creature which recently starred in its own movie, “The Meg”, which was released in 2018 and grossed more than $500 million dollars in cinemas, it is not only it size and body proportions that cause debate.  Its taxonomic placement is also controversial.  Most scientists consider “megalodon” to be a member of the Lamniformes Order – the mackerel sharks, furthermore, part of the Otodontidae family, the “megatoothed sharks”, but the phylogeny of the species remains uncertain.

Most studies of “megalodon” rely on comparisons with Carcharodon carcharias as the teeth morphology is similar, but in this research, the scientists estimated the body size and proportions of the extinct animal by comparing it to Great Whites and four other types of mackerel shark – namely: The Hollywood “megalodon” was around twenty-three metres in length.  The scientific paper does not suggest that this shark was that big, but their results suggest that a sixteen-metre-long animal had a head around 4.65 metres in length, that’s about the length of a Range Rover Discovery 4×4 vehicle.  The tail fin was estimated to have been approximately 3.85 metres high and this study suggests that the dorsal fin was around 1.62 metres tall.

This research is not likely to influence movie makers and film directors as they plan a sequel to the 2018 release, but the reconstruction of this giant fish,  represents a significant step towards a better understanding of the physiology of this monster.  In addition, having a better understanding of its body proportions and overall size will allow scientists to infer how much food these animals had to consume and other factors that may have facilitated its ultimate demise and extinction.

The Hollywood Movie was Based on the Novel by Steve Alten 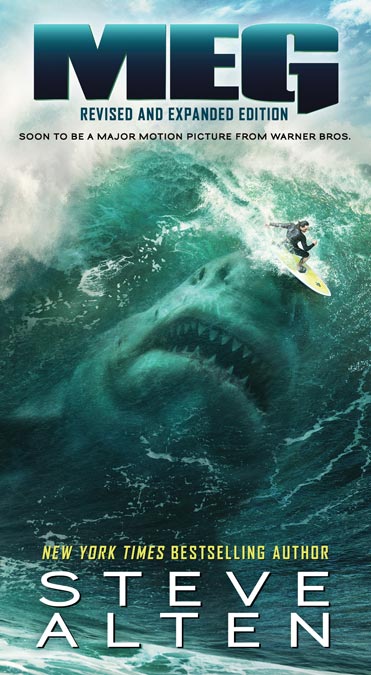 Exciting and thrilling adventure story based on “Megalodon”.  This research suggests that this giant prehistoric shark would have dwarfed a surfer.