Although the French manufacturer (Papo), has produced several ceratopsian models in the past (Triceratops, baby Triceratops, Styracosaurus and Pachyrhinosaurus), this is the first horned dinosaur to be depicted in a rearing pose.   Much praise has been heaped on the broad shoulders of the Pentaceratops figure, it has proved to be a big hit with collectors and dinosaur model fans. 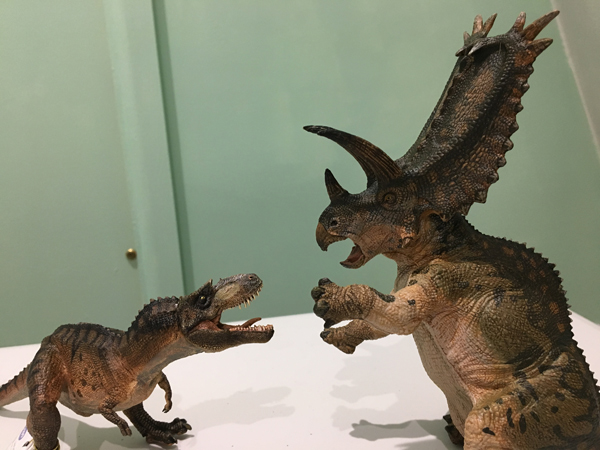 “Fantastic figure!  A really dynamic pose, plenty of finer details and a great realistic paint job.  This one will really stand out amongst my collection.”

Our thanks for your comments, Ryan, we really like the cryptic quip about the model “standing out”, it certainly does with its upright rearing pose.

For David, the Papo Pentaceratops and our awarding winning customer service are two things worth praising.  A great big thank you to all those very kind people who have taken the time and trouble to review our models, both on our website also via our Feefo feedback pages.

The Papo Pentaceratops and the Papo Gorgosaurus model for that matter, are available from Everything Dinosaur, to view these models and the rest of the extensive Papo prehistoric animal model range: Papo Dinosaur and Prehistoric Animal Models