We have been asked by dinosaur fans and model collectors to post up more pictures and information about some of the new for 2019 prehistoric animal models that have come into stock at Everything Dinosaur.  Our team members are happy to acquiesce and we have recently posted up onto our Facebook, Instagram and Pinterest pages pictures of some of the new Schleich and CollectA figures.  One of the questions we have been asked is whether or not the new CollectA Deluxe Baryonyx dinosaur model (1:40 scale), has an articulated jaw.  Yes, it does, we even shot a short video to demonstrate this.

In this short, YouTube video (it lasts around 20 seconds), we show the CollectA Baryonyx and we demonstrate the lower jaw.  This is a carefully crafted dinosaur figure and the jaw reflects the dentition associated with baryonychid dinosaurs and the upper jaw has that distinctive “notch” that is associated with the holotype fossil material retrieved from a Surrey clay pit (Weald Clay Formation), after the initial fossil discovery in 1983. Details on the Base

In order to best represent the anatomical proportions of this dinosaur, the design team at CollectA opted to place this 2019 version of Baryonyx on a base.  However, the base is far from just a support for the model, it has been beautifully sculpted and shows lots of detail.  For example, there are some plant fronds to be found on the base and the effect is to indicate that the Baryonyx is walking along a muddy, slippery riverbank, an environment in which this semi-aquatic dinosaur would have been very much at home. 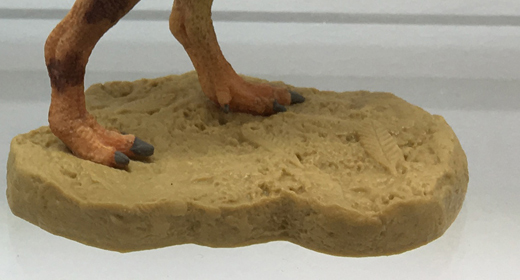 Close-up view of the base of the new for 2019 CollectA Baryonyx model.

Although it is difficult to spot on the actual model, the design team at CollectA were keen to give the impression of webbed feet on this dinosaur.  Palaeontologists have speculated that this theropod may have had webbing between its toes, an adaptation to help it to move around in its aquatic environment.