A New Species of Therizinosaur from China

Scientists from the Chinese Academy of Sciences in collaboration with the University of Alberta, have announced the discovery of a new Therizinosaur based on fragmentary fossils from the Lower Cretaceous Jehol Group of Liaoning Province (north-eastern China).   This is the third Therizinosaur to have been named from the Jehol Group, joining Jianchangosaurus and Beipiaosaurus.  These dinosaurs are approximately the same size, the researchers have put forward a number of theories to help explain why three similar-sized members of the Therizinosauridae could have potentially co-existed without directly competing.

The dinosaur has been named Lingyuanosaurus sihedangensis (pronounced: ling-you-an-oh-sore-us), the genus name honours the city of Lingyuan, whilst the trivial epithet refers to the town of Sihedang where the fossils were discovered.

Fossil Material Ascribed to Lingyuanosaurus sihedangensis Prior to Complete Preparation The picture above shows some of the fossils used to name and describe this new species of dinosaur.  Top left (a), limb bones consisting of a right femur and left tibia, whereas, (b) contains ribs, part of the right humerus and the ischium.  Slab (c) consists of claw bones (manual unguals) and ribs, whilst (d), shows the right ankle bone (astragalus) and the left ilium.  Note the scale bar equals 5 cm.

An Intermediate Position within the Therizinosauria

Described from a single, disarticulated but associated partial skeleton, the exact age of the fossils is disputed.  The fossil-bearing strata at Sihedang have been assigned to the Yixian Formation in some studies but to the younger Jiufotang Formation in others.  A phylogenetic analysis carried out by the authors places Lingyuanosaurus in an intermediate position within Therizinosauria.  It has been placed between the early-branching Therizinosaurs such as Falcarius, Jianchangosaurus, and Beipiaosaurus and the late-branching ones such as Alxasaurus and Therizinosaurus.  Lingyuanosaurus sheds additional light on the evolution of major Therizinosaurian characteristics, including the distinctive pelvic girdle and hindlimb morphology seen in this group.

A Drawing of a Typical Therizinosaur 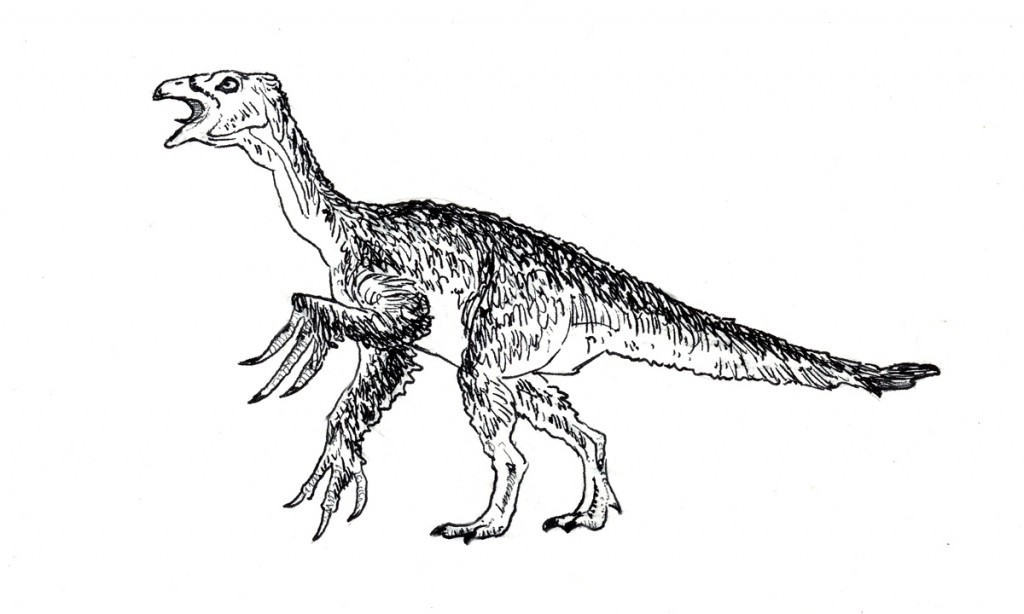 A drawing of a typical Therizinosaur.

Where Did Lingyuanosaurus Fit into the Jehol Biota?

Measuring around two metres in length, this is the third similar-sized Therizinosaur to be assigned to this Early Cretaceous biota of northern China.  The presence of three very similar types of dinosaur in the Jehol Group is unusual.  Unless the region was particularly rich in resources, these dinosaurs could have been in direct competition with each other.  The researchers put forward several possible explanations as to why three similar Therizinosaurs have been identified.