JurassicCollectables have produced a video review of the limited edition Rebor Club Selection hatching Stegosaurus “Clover”.  Only 1,000 of these beautifully crafted figures have been made and there are only a handful of these replicas in stock, but by watching this video review, collectors are able to get an idea of the quality of this figure from Rebor, even though only a few models remain.

Made in the spring of 2017, the hatchling Stegosaurus figure forms part of a set of limited edition figures manufactured by Rebor.  In this excellent video review from JurassicCollectables, the presenter first shows the matt finished packaging and then carefully displays the box contents before unpacking each of the items.  Rebor like to offer something a little different with this line, something that is quite quirky.  For example, in this video review a reference is made to the recently reviewed Rebor hatchling Baryonyx nicknamed “Hurricane”, that was supplied with a model of a football, to coincide with the 2018 World Cup.  The Stegosaurus figure set includes a skilfully crafted model of a four-leaf clover.  Clover (Trifolium genus), may not have been around during the Late Jurassic, but as a four-leafed clover is supposed to be lucky, then a young Stegosaurus could do with all the luck it could get growing up in the western United States with a large number of carnivorous dinosaurs in the same ecosystem, any of which would have greedily snapped up a hatchling Stegosaurus. Rebor hatchling Stegosaurus “Clover”.  The polystone figure is supplied with a detachable model of a “lucky” four-leaf clover.

In the video, the narrator comments upon the superb details that Rebor builds into their figures.  For instance, the finely detailed body scales on the baby Stegosaurus are highlighted.  The egg with its fine lines and carefully plotted cracks adds a degree of realism to the figure.  The model is placed on a revolving turntable and this provides the viewer with the opportunity to see this highly collectable figure from a variety of viewpoints.

A Video Review of a Rebor Stegosaurus Dinosaur Model “Clover” 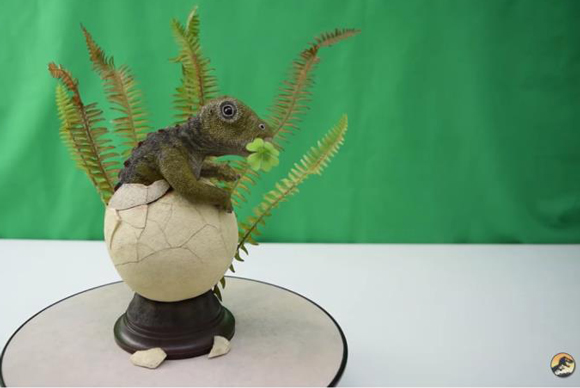 Highlighting the Exquisite Detail on the Club Selection Hatching Stegosaurus Towards the end of the video review, JurassicCollectables provide model measurements, always helpful information to collectors.  At Everything Dinosaur, we have measured this figure too.  We have recorded a height of 18 cm for this replica when resting on its base, the circumference of the egg is around 30 cm.  The hatching Stegosaurus with the ferns acting as a backdrop makes an excellent conversation piece, a point made several times by the video narrator.

Can You Spot the Four-leaf Clover? To view the range of Rebor figures and replicas available from Everything Dinosaur, including the limited edition Club Selection hatching Stegosaurus (whilst stocks last): Rebor Dinosaurs and Prehistoric Animals