The Future is Bright for Eofauna Scientific Research

Eofauna Scientific Research has some exciting times ahead.  The company is soon to release details of the next model in its 1:40 scale replica series and when Everything Dinosaur has permission to do so, we will be telling our blog readers all about it and showing pictures.  In the meantime, team members from Everything Dinosaur recently met up with staff from Eofauna Scientific Research as the two organisations work together to help introduce new prehistoric animal figures. Eofauna Scientific Research consists of a team of dedicated researchers, creatives and specialists in prehistoric fauna.  With a broad background in the fields of palaeontology, biology, design and model making the organisation is ideally placed to develop a range of highly realistic, scientifically accurate prehistoric animal figures. At Everything Dinosaur, we work very closely with model makers and designers.  Our aim is to bring to our customers the very best prehistoric animal and dinosaur figures available.  Sue, (Finance Director at Everything Dinosaur), held very positive talks with Asier and Joseba of Eofauna Scientific Research, in a statement following her recent meeting Sue said:

“We have been working with Eofauna for some time.  They are a very dedicated team and share our goal in being able to provide highly detailed, sculpted figurines based on anatomically correct, accurate reconstructions from the fossil record.  The company has some very exciting plans and we are looking forward to continuing our close working relationship.”

In October 2017, Everything Dinosaur took in stocks of the first model in the range, a replica of a Steppe Mammoth (Mammuthus trogontherii), a beautiful scale model which is based on real fossils of this Pleistocene-aged animal. 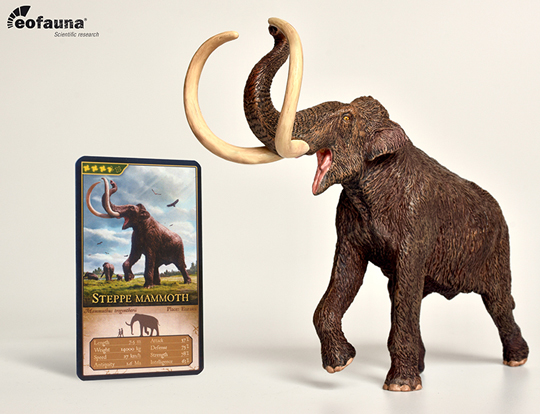 The first PVC figure to be produced in this series has received rave reviews from model collectors.  Since, its introduction into the Everything Dinosaur range, the figure has received 5-star reviews (FEEFO independent data).

The review of Everything Dinosaur customer “Paleo collector” is typical:

“This is a skilfully sculpted figure with close attention paid to anatomy and posing, the molars can even be seen in the open mouth.  The delicate fur pattern and muscle definition underneath make this mammoth a museum quality piece.  The model is solid PVC and comes with a collectors’ card along with an info tag.  This is one of the most accurately sculpted mammoth figures I’ve ever seen and highly recommended for collectors of prehistoric models or elephants/mammoths in general.”

A Close-up View Showing Details in the Mouth of the 1:40 Scale Replica A close-up view of the mouth of the Steppe Mammoth. Blog readers and visitors to Everything Dinosaur’s social media pages can rest assured, we will be posting up details of the next model in the fantastic Eofauna Scientific Research range shortly.