Our thanks to the children in the Reception class at Egerton Primary School (Knutsford, Cheshire), who sent in dinosaur drawings and thank you letters after our dinosaur workshop conducted at their school recently.  The children have been learning all about life in the past this term and they were enjoying studying dinosaurs and learning about famous fossil hunters such as Mary Anning.  As part of an extension activity that we had agreed with the enthusiastic teaching team, we challenged the children to design their own dinosaur.  We received some amazing prehistoric animal drawings plus some super thank you letters.

Children in Reception Class Write to Everything Dinosaur

The Reception class at Egerton Primary School (Knutsford, Cheshire) sent in dinosaur themed letters and drawings after a dinosaur and fossil workshop from Everything Dinosaur.

Several of the children had been learning facts about long-necked dinosaurs.  Brachiosaurus, a dinosaur known from the Upper Jurassic of the United States, was particularly popular amongst the young palaeontologists.

Brachiosaurus was a Particular Favourite Dinosaur

A Brachiosaurus dinosaur drawing by a child in the Reception class at Egerton Primary School (Knutsford, Cheshire).

Many of the colourful dinosaur drawings and letters have been posted up onto the walls of Everything Dinosaur’s warehouse.

Beasts of the Mesozoic Update

Beasts of the Mesozoic Update

Beasts of the Mesozoic Ready to Spring by Late Spring

Dinosaur fans and model collectors will have just a few more short weeks to wait before the entire range of the eagerly anticipated Beasts of the Mesozoic collection of “Raptors” is available.  These beautifully sculptured, 1:6 scale replicas are currently entering the final phase of production, some of the models are due to be completed and made ready for sale next month but others such as the exquisite Adasaurus, along with Tsaagan, Acheroraptor and the two Saurornitholestes replicas, are not due for completion until the end of March. The Beasts of the Mesozoic Tsaagan mangas 1:6 scale replica.

David Silva of Creative Beast Studios, the visionary behind this exciting range of poseable prehistoric animal figures explained factory closures over the Chinese New Year would lead to some delays, but the priority was to produce the most scientifically accurate and highly detailed “raptor” models possible. 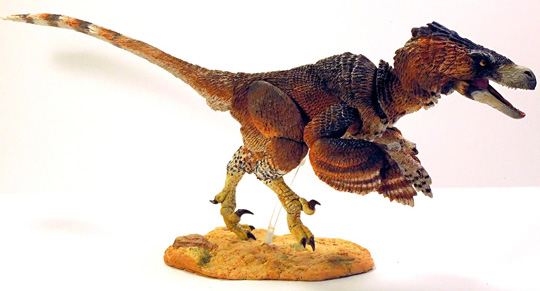 The Beasts of the Mesozoic 1:6 scale model (Adasaurus mongoliensis).

In stock at Everything Dinosaur in April

A spokesperson from Everything Dinosaur, which has been given exclusive access to the Beasts of the Mesozoic range stated;

“We are confident that by sometime in late April, all the Beasts of the Mesozoic figures that we have committed to will be arriving in our warehouse.  The creation of this dynamic, new series has been a real labour of love, it might have taken millions of years for the Maniraptorans to evolve, but model collectors and dinosaur fans will have just a few more weeks to wait.”

Both Everything Dinosaur and Creative Beast Studio will be closely monitoring the production process and we look forward to releasing further updates and news about the imminent arrival of this thrilling new chapter in the evolution of dinosaur figures.

As well as the amazing 1:6 scale “Raptors”, Everything Dinosaur will also be stocking the Environment Accessory Packs (Wetlands, Desert, Forest and Mountains) along with the Beasts of the Mesozoic “Nestlings” – amber, black and grey.

Everything Dinosaur Will Also be Stocking the Environment Accessory Packs Beasts of the Mesozoic “Nestlings” – A Trio of Black Raptor Nestlings

Beasts of the Mesozoic Nestlings – Black.

Demand is likely to exceed supply of this excellent model range.  Everything Dinosaur has opened a “Special Reserve/VIP” list offering our customers priority access to this range when they come into stock.

To request to join our “Special Reserve/VIP” list, simply email: Email Everything Dinosaur to Join our VIP Reserve List