From Dinosaur Arms to the Wings of Birds

New Study Helps to Explain How Dinosaurs Got their Wings

Most scientists now agree the feathers originated in the Dinosauria and that Aves (birds) are descendants from a group of bipedal, very bird-like dinosaurs that make up a portion of a larger group of dinosaurs known as the Theropoda.  In essence, the birds we know today evolved from dinosaurs (specifically the Maniraptora).  However, despite a lot of fossil evidence to indicate that the birds are closely related to and descended from the Dinosauria there have been one or two areas that have led to some confusion.  Take for example, the wrist bones.  The numerous wrist bones in dinosaurs and their relatively immobile wrists evolved over time into the highly flexible wrists with fewer bones that scientists see today in living birds.  The wrist bones in birds helps to manage the forces involved in the movements of the wing in flight.  They also permit the wings to be folded back when the bird is not flying, so how the wrist bones of dinosaurs evolved into the specialised and highly modified wrist bones of birds has been the subject of much debate.

The Evolution of a Wrist Designed for a Wing 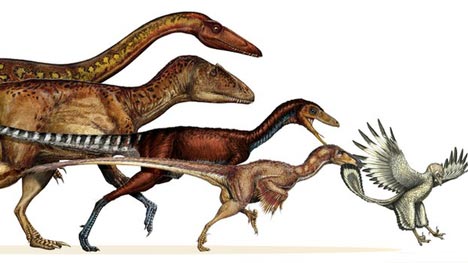 A new study by a team of scientists based at the Universidae de Chile (University of Chile), Santiago, Chile and published in the academic journal PLOS Biology may have solved this palaeontological puzzle.

Nine into Four Does Go

Let’s start with a very simple explanation of the problem.  Scientists studying living species, in this case birds and specifically ducks, chickens, lapwings, finches and budgerigars that were used in this study, can examine in minute detail the living organism.  They can also study embryos to see how the bones in the wrist are formed.  The scientists can also study the wrist bones and embryos of reptiles such as caiman to provide data on the wrist bones and embryonic growth of other types of archosaurs.  The Archosauria is the division of Reptilia that contains the dinosaurs and crocodiles, it is from the archosaurs that the birds evolved.  These scientists can see how the anatomy of an animal develops.  Techniques such as cell and molecular biology studies can reveal all sorts of information with regards to how the wrists of extant (living organisms) form.  Palaeontologists, on the other hand, (no pun intended) only have a very incomplete fossil record to study.  So scientists are using different data sources to study wrist bone evolution.

Research to help identify the wrist bones in dinosaurs and the corresponding bones in the wrists of birds draws data from two radically different sources:

This new study shows how the modern bird wrist with its four bones, arranged in an approximate square shape corresponds to the nine bones found in non-avian dinosaurs.  The team have looked at how dinosaur wrists evolved and report on previously undetected evolutionary processes including loss, fusion and in one case, a re-evolution of a bone once lost in the Dinosauria.

A Critical Advance in Understanding

This new study effectively combined these two areas of research.  The laboratory run by Alexander Vargas (University of Chile) and lead author of the study, developed a new method of looking at specific proteins in the embryos and produced three-dimensional maps to demonstrate how the wrist bones formed.  This new method has been named whole-mount immunostaining.  It allows scientists to observe skeletal development in embryos much better than before.  At the same time, the research team re-examined the fossils of dinosaurs and prehistoric birds in a bid to tie the two strands of research together.

Back in the 1960s the palaeontologist John Ostrom, re-ignited the bird/dinosaurs debate by proposing that fearsome, sickle-clawed predators such as Deinonychus (D. antirrhopus) were agile, active animals and very bird-like.  He proposed that the semilunate bone, one of the four bones making up the square-shaped arrangement of bones in a modern bird’s wrist had actually formed from the fusing of two bones present in dinosaur fossils, such as those bones found in the wrists of dinosaurs like Deinonychus and its relatives.  This new technique, confirms that Ostrom was right.

Deinonychus Part of the Dinosaurs to Birds Story Whole-mount immunostaining and the mapping of cartilage formation and proteins in the embryos of birds, allowed the scientists to confirm that the semilunate in Aves does form from as two separate cartilages which fuse and ossify into a single bone, proving that Ostrom was very probably on the right track nearly fifty years ago.

“These findings eliminate persistent doubts that existed over exactly how the bones of the wrist evolved and iron out arguments about wrist development being incompatible with birds originating from dinosaurs.”

This research has helped scientists to work out how the nine bones found in the wrists of some theropod dinosaurs gradually evolved into the four bones seen in modern birds.  In addition, this study produced a surprise, a result that was not expected.  A small bone present in the wrists of a group of dinosaurs known as the Sauropoda, disappeared in the bipedal theropods, but re-evolved when some theropods began to fly.

Sauropods and theropod dinosaurs are closely related.  They represent the two types of dinosaur that make up the Saurischia (lizard-hipped dinosaurs).  Sauropods walked on all fours and had a small bone in their wrist called the pisiform that had a function in their four-legged, quadrupedal stance.  Theropod dinosaurs were essentially bipeds (walking on their hind limbs).  The arms of these dinosaurs were no longer used for walking but for catching and subduing prey.  Over millions of years the pisiform bone was lost from the wrists of the two-legged theropods.  However, the authors of this study discovered that the pisiform had reappeared in early birds, probably as an adaptation for flight, where this small wrist bone permits the transmission of force on the down-stroke of a wing beat whilst restricting flexibility on the up-stroke phase of a wing beat.

The Evolution of the Wrist from Dinosaurs to Birds The chart shows the colour coded bones and how they changed over time.  For example, the pisiform bone (red) can be found in the Early Jurassic ornithopod Heterodontosaurus (not a theropod) and in the Late Triassic theropod Coelophysis.  This bone is lost in later theropods such as Allosaurus and Guanlong but evolves again in primitive birds such as Sapeornis.  Sapeornis was about the size of a seagull, it seems to have been a strong flyer.  It lived during the Early Cretaceous.

The colour coded chart also shows how the square-shaped arrangement of bones in a modern bird such as the chicken evolved, with the fusion of the distal carpal 1 and the distal carpal 2 bones (yellow and green).  In the maniraptoran Falcarius, a member of the Therizinosauroidea and not a direct ancestor of birds, these two bones are distinct.  However, in those maniraptorans believed to be more closely related to the birds, indeed, the ancestors of Aves, dinosaurs such as Khaan, Deinonychus and Yixianosaurus these two carpals become fused to form the semilunate found in the wrists of modern birds.