New research on the unique teeth of a 100-kilogram lion-like marsupial that lived 50,000 years ago is opening the way to understanding what may have been the most specialised carnivore Australia has ever seen.

Museum Victoria and Monash University Honours student Angela Olah has begun a research project that aims to understand the peculiar teeth of Thylacoleo carnifex – an Ice Age-era animal often referred to as a marsupial lion – by studying fossils collected from across Australia, now in the collection of Museum Victoria.

Research into the Diet of the Marsupial Lion 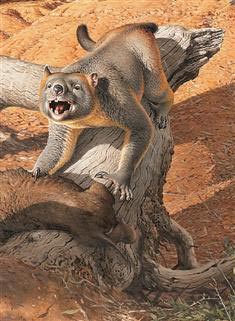 New research project to be undertaken.

“Thylacoleo was originally thought to be a herbivore because of its lack of canines (fang teeth) and because it belongs to the order Diprotodontia, which also includes kangaroos and other herbivores,” said Olah.  “However, Thylacoleo had long blade-like teeth along its upper and lower jaws that could have acted as scissors for meat.  They would have been useless for chewing vegetable matter.”

“Thylacoleo’s blade-teeth suggest it had a limited carnivorous diet and was therefore a specialised hunter.”

To determine the nature Thylacoleo’s diet, Angela will be comparing the marsupial lion’s blade-teeth to teeth from living animals whose hunting methods can be directly observed, such as lions, hyenas and leopards.  She will also be using advanced laser scanning techniques and 3-D printing in her research.

“Thylacoleo’s teeth set it apart from every other living animal, so this research will shed some light on the evolution of Australian marsupials,” Angela said.  “In addition to that, by learning about Thylacoleo’s diet we also learn about the ecology of the area it lived in, which is key to unravelling the mystery of its extinction along with other Ice Age beasts.”

To read about a recent discovery of giant Diprotodont fossil bones in Australia: New Research into Megafauna of Australia Hints at Extinction Theory.

Everything Dinosaur is grateful to the Museum Victoria (Melbourne, Australia) for sending us this news.