The Relationship between Hominids and Lemurs – Darwinius masillae

The Evolution of Primates and Hominids in the Popular Press

Much publicity has surrounded the publication of information on the fossilised remains of a Palaeogene lemur-like animal.  The phrase “missing link” has once again found its way into the popular media, although from a scientific perspective this particular term is regarded as not valid and indeed often misleading.

The fossil representing the remains of a young, female is from the famous Messel shales, near Frankfurt in southern Germany.  It is regarded as one of the best locations in the world for Eocene fossils, although the importance of this area was not recognised until the early 1970s.  The site was originally an iron ore mine, although later the area was exploited for its coal reserves.  Despite numerous spectacular fossil finds such as crocodiles, early mammals and birds the Messel pits were almost converted into a land fill and rubbish dump but a campaign to save the site and permit further scientific exploration was successful.  It is pleasing to note that the Messel shales area has been purchased by the German Government, in a move that should secure the location and permit more research and long-term scientific study.

The area is often called “Marvellous Messel” by palaeontologists, this is because of two main reasons, firstly the diversity of fauna and flora represented by the fossil record and secondly because of the exquisite detail preserved in many of the fossils.

The shales at Messel were formed by layers of fine, soft mud at the bottom of a deep, stagnant freshwater lake.  This lake was fed by numerous streams and animal and plant remains washed into the lake quickly sank to the bottom and were slowly covered by sediment.  The still water conditions at the bottom prevented a lot of oxygen building up and crucially the bacteria which normally is responsible for decomposing organic matter was virtually absent.  The remains were largely untouched and as a result the Messel fossils show amazing detail.  Fossils of leaves and insects have been preserved and show remarkable detail.  Many of the larger animals such as miniature horses, bats, and primitive hedgehogs show traces of fur and even the remains of their stomachs can be analysed.

The fossils date from approximately 15 million years after the Cretaceous mass extinction event and the demise of the dinosaurs.  The world is enjoying something of a renaissance with mammals beginning to dominate ecosystems and establish themselves as the main constituents of the mega fauna.  The world is dominated by flowering plants and tropical rainforest.  At its peak, the rainforest stretched from the tips of South America and Africa right up to southern Canada, China and the middle of Europe.  Even the UK basked in a tropical climate.   Scientists believe that the global average temperature during this particular period in the Earth’s history was a balmy 28 degrees Celsius.  This compares to the 14-15 degrees Celsius today.  It is in this hot house like atmosphere that the lemur-like animal and her kind lived out their lives.

Very few fossils of early primates have been found, they are extremely rare in the fossil record.  Indeed much can be said of all the simian and hominid fossils too.  The trouble is our arboreal (tree-dwelling) or open plains ancestors lived in the wrong environments as far as palaeontologists are concerned.  Forests and open grasslands are locations where fossilisation and preservation are most unlikely to occur on any large scale, the conditions are not right to permit rapid burial of any corpse and preservation.  For example, we once calculated that all the skull material from early African hominids could be quite easily stored in one of our small vans.

Despite the vast expanse of rainforest and the abundance of environmental niches in such a habitat for monkeys and primates, only eight fragmentary specimens of primates are known from the Messel shales.  The primitive lemur-like Godinotia (Godinotia neglecta) is one of the better known primates from this period.  It had limbs that were adapted to grasping branches and large orbits in its skull (indicating large eyes).  Perhaps this particular animal was nocturnal.  This would have made sense as at only 30 centimetres long (most of that represented by tail), this animal would have been very vulnerable to attack.

However, the discovery of a new species of primate at Messel, an almost complete specimen; has enabled scientists to learn more about primate evolution and ultimately, although the press always blows this out of proportion, to learn a little more about the origins of man.  Messel has yielded up the almost complete skeleton of another lemur-like creature, a young female probably less than a year old but the completeness of the specimen and the exquisite preservation has permitted scientists to study the beginnings of the primates in much more detail than ever before.

This new primitive creature represents a new genus and has been named Darwinius masillae, quite appropriate as 2009 is so heavily associated with Charles Darwin what with the 200th anniversary of his birth. 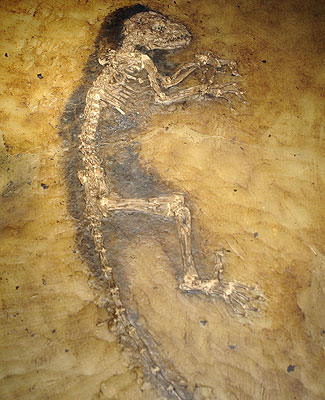 Like many very special fossils, this specimen has an unusual excavation history.  It was apparently discovered in 1983 by private collectors who decided to split the specimen in half and sold the fossil on separate plates.  Although they had the part and counterpart of the fossil, they thought that more money could be obtained if the part and the counterpart were sold separately.  These specimens ended up in different museum collections.  In addition, in order to enhance the value of one of the plates, it was embellished a little by the restoration team before being offered for sale.

One part of the fossil was sold to a private museum in the USA, the second more complete and entire fossil (including the tip of the animal’s tail), now belongs to the Natural History Museum of the University of Oslo (Norway).  Once it was realised that these two specimens were the part and counterpart of each other and that they represent the same specimen, a much more complete and thorough study could be carried out.  Fortunately, x-ray analysis of the American portion of the specimen revealed how much of this fossil had been fabricated, but the two plates together have yielded some remarkable data about early primates.

On Display at the American Museum of Natural History

Both fossils are now on display at the American Museum of Natural History (New York), amidst much fuss over the “missing link”showing our earliest ancestor and all that hyperbole.  No doubt it is a superb specimen, even the outline of fur and stomach contents have been preserved, the study was led by John Hurum of the Natural History Museum (Oslo).

Commenting on the fossil’s completeness he stated that it was “a dream come true” and said that the fossil was “the closest thing we can get to a direct ancestor”.

This fossil, like so many others was nick-named during the preparation, she was called “Ida” and although clearly an animal on the road to human evolution with her poseable thumbs and other primate-like characteristics, she does not represent a direct human ancestor, but a sub-branch of our evolutionary tree – a sort of “Aunt Ida” if you will.

“She belongs to the group from which humans developed, but my impression is she is not on the direct line”.

The fossil does represent the most complete primate discovered to date, although the light and delicate nature of the fossil and the bones having been crushed during the preservation means that individual portions cannot be handled.  Radiographs (x-rays) have revealed a lot of information, for example, the jaw has adult teeth emerging giving an indication of the age of the animal.  The pelvic girdle suggests female and so the scientists studying “Ida” have concluded that she was an independent, fully weaned sub-adult that died in her first year of life.  She did not possess claws but had nails (just like we do) and would have been quite at home in the trees of the Messel rainforest.

Ida was approximately 50 centimetres long, half of this length was made up of the tail.  If she had reached full adult size she would have still weighed less than 2 kilogrammes.  Darwinius masillae is a very significant discovery.  It is the most complete primate fossil found to date and will permit scientists to study her life history, diet and locomotion.  Any future study of early Palaeogene primates will benefit from the work done on “Ida”.

This animal is not just a fossil lemur, the fossil shows no evidence of a grooming claw (toilet claw) or indeed a tooth comb.  The tooth comb, otherwise known as a dental comb is an arrangement of incisor and canine teeth found in the lower jaws of lemurs and other prosimians. The tooth comb is used to help lemurs groom themselves and others in their social group, but Darwinius masillae did not possess these features, placing her amongst a larger group of primates, the Adapoidea.  Unfortunately, we fear that “Ida” will be associated with the phrase “missing link” for a long time to come.   This term is not really valid, as in essence there is no such thing as a specific missing link between species, merely occasional finds of exceptional fossil material that represents transitional forms between genera and species.