Dinosaurs Innovated When it Came to Egg Production

Many museums include the fossilised remains of dinosaur eggs amongst their natural history collections and palaeontologists are aware that reptiles were laying eggs on land long before the dinosaurs evolved, but what we know about the evolution of reptile eggs (amniotic eggs in general), is largely based on inference and conjecture.  The problem is, for the first 100 million years or so of amniote evolution, there is very little fossil data related to reptile reproduction to study.  What we do know, is based on Middle Jurassic to Late Cretaceous fossils.  Although, dinosaur eggs are rare, the examples we do have, such as those associated with Asian oviraptorids demonstrate that dinosaur eggs had thick, hardened shells.  However, a new study suggests that it was not always like this and that the three main Sub-orders of the Dinosauria probably evolved thick, tough eggs independently.

Examples of Eggs from Different Archosaurs (Avian and Non-avian Dinosaurs) 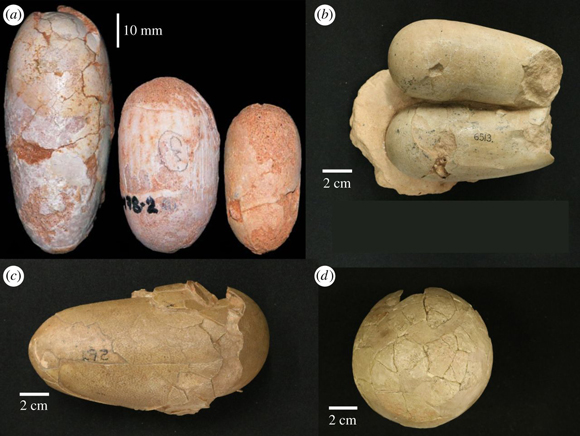 Writing in the on-line, open access journal “Scientific Reports”, a team of scientists, including Robert Reisz (University of Toronto Mississauga) and Koen Stein (Royal Belgian Institute of Natural Sciences, Brussels), have examined some of the oldest examples of dinosaur eggs known and revealed new information about the evolution of dinosaur reproduction.  The researchers examined the eggs and eggshells of three coeval, but geographically widely distributed Early Jurassic basal Sauropodomorph dinosaurs (Sinemurian faunal stage).  These fossils came from Argentina, China and South Africa and include the eggs of Massospondylus and Lufengosaurus.  Their analysis showed that the basal Sauropodomorph eggs all had the basic structure, they had a thin calcareous layer less than 100 microns thick.  This thin shell layer contrasts strongly with the much thicker calcareous shells associated with Late Jurassic and later dinosaur eggs.

At approximately 195 million years old, they are the earliest known eggs in the fossil record, and they were all laid by similar, herbivorous dinosaurs that ranged in size from four to eight metres in length and were the most common and widely spread dinosaurs of their time.  These types of plant-eating dinosaur were the forerunners of the giant Sauropods of the Jurassic, dinosaurs such as Brontosaurus, Diplodocus and Brachiosaurus. “Reptile and mammal precursors appear as skeletons in the fossil record starting 316 million years ago, yet we know nothing of their eggs and eggshells until 120 million years later.  It’s a great mystery that eggs suddenly show up at this point, but not earlier.”

The researchers concluded that these Early Jurassic eggs represented a step in the evolution of dinosaur reproduction, their shells were paper-thin and brittle, proportionately much thinner than the eggs of extant birds.  However, thicker, tougher eggshells in the Dinosauria were to evolve across all three Sub-orders later.  The much thicker eggshells associated with Sauropods, Ornithischian dinosaurs and the Theropoda must have evolved independently.

“We know that these early eggs had hard shells because during fossilisation they cracked and broke, but the shell pieces retained their original curvature.”

Other authors of the scientific paper include Edina Prondvai and Jean-Marc Baele.  Shell thickness was analysed along with membrane thickness, mineral content and distribution of pores, looking for clues about why these early eggs might have developed hard shells.  The scientists concluded that hard-shelled eggs evolved early in dinosaur evolution, with thickening of the calcareous layer (greater than 150 microns), occurring independently in several groups, but a few million years later other reptiles also developed hard-shelled eggs.  One possibility is that hard and eventually thicker shells may have evolved to shield dinosaur embryos and other reptiles from predators.

“The hard shells would protect the embryos from invertebrates that could burrow into the buried egg nests and destroy them.”

Linked to Increased Oxygen in the Atmosphere

Advanced mineralisation of amniote eggshell including those of dinosaurs (≥150 microns in thickness), in general occurred not earlier than the Middle Jurassic and may correspond with a global trend of an increase in atmospheric oxygen.  If there were higher levels of atmospheric oxygen, then this would facilitate more efficient gaseous exchange through the porous eggshell and across the egg membranes.  More efficient diffusion would permit the evolution of thicker eggshells, which in turn would offer greater resistance to damage and more protection from predators. New research into 195 million-year-old baby dinosaurs and their eggs.

The study raises some intriguing questions that may well lead to further research projects.  For example, palaeontologists are aware that many types of marine reptile evolved viviparity (live birth), whilst the fossil evidence for the terrestrial Dinosauria seems to indicate that they continued to rely on egg laying.  Why didn’t the highly diverse dinosaurs evolve different reproductive strategies over their 160 million years of existence?

Everything Dinosaur acknowledges the assistance of a press release from the University of Toronto in the compilation of this article.