If you could travel back in time and visit western North America 66 million years ago, you might find yourself within the territory of a Tyrannosaurus rex.  Not a very safe place to be you might think, you would probably be right, but the Hell Creek fauna contained another Theropod dinosaur, one that was perhaps, more dangerous to a human visitor than a T. rex or for that matter the other apex predator known from the Hell Creek Formation – Dakotaraptor steini.

Named and scientifically described in 2013, the real man-eater of Hell Creek might have been Acheroraptor (A. temertyorum), at around three metres long and weighing as much as a German Shepherd dog, a pack of these ferocious hunters would probably have made short work of any human visitor to the Late Cretaceous who was unfortunate to encounter them. A scale drawing of Acheroraptor.

Named after the River of Pain “Acheron” in the underworld from Greek myth, Acheroraptor was one of the very last of the non-avian Theropod dinosaurs and it probably played a secondary predator role in the Hell Creek ecosystem.  There were larger predators, the five-and-a-half-metre-long Dakotaraptor for example, that like Acheroraptor was one of the very last dromaeosaurids to evolve.  However, packs of Dakotaraptors and the iconic Tyrannosaurus rex may not have considered a single person much of meal and may not have expanded a lot of energy in trying to catch them.  To a pack of Acheroraptors, a human would have made a very satisfactory lunch, best to avoid Acheroraptor if you can. 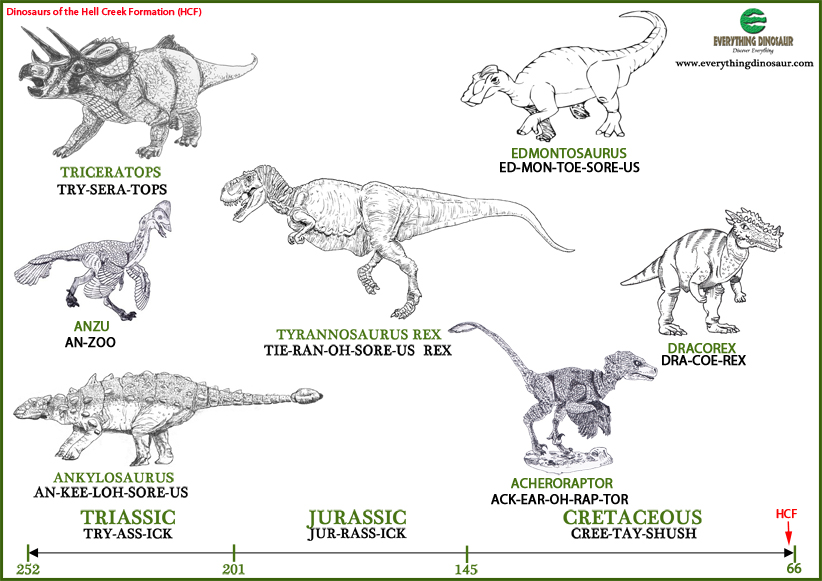 Typical dinosaurs of the Hell Creek Formation.   Although there were larger predators, to a person visiting Montana 66 million years ago, meeting a pack of Acheroraptors would have been extremely dangerous.

Part of the Vertebrate Fossil Collection at the Royal Ontario Museum

The specific or trivial name “temertyorum” was selected to honour James and Louise Temerty in recognition for their outstanding support and contribution to the Royal Ontario Museum, which houses the jaw fragments that led to the scientific description of this dinosaur back in 2013.  Acheroraptor probably lived in packs and may have had a role similar to extant hyenas or jackals in present-day ecosystems.  Palaeontologists had suspected that dromaeosaurids roamed Montana in very last years of the Cretaceous, numerous teeth with their diagnostic wide ridges (denticles) had been discovered, but the lack of fossilised bones prevented scientists from assigning a genus.

The Holotype Fossil Maxilla and Lower Jaw (Dentary) of Acheroraptor “There is a considerable amount of evidence that supports the idea of the existence of a Cretaceous Beringian land bridge linking North America and Asia.  This land bridge may not have been permanent but appeared at times when sea levels fell, permitting a faunal exchange between dinosaur-based ecosystems.  The ancestors of Acheroraptor temertyorum probably migrated into North America.”

To read Everything Dinosaur’s recent article about Alaskan trace fossils providing evidence of a mixing of dinosaur faunas from Asia and North America: Did Alaskan Therizinosaurs and Hadrosaurs Live Together?

There are lots of models of the Hell Creek Formation biota available, countless T. rex and Triceratops figures for instance, but it was the clever and talented David Silva of Creative Beast Studio who created a 1/6th scale replica of Acheroraptor within the amazing “Beasts of the Mesozoic” model range. The Beasts of the Mesozoic Acheroraptor model.