Interactive three-dimensional models of human joints, showing how common medical complaints have arisen and how we are likely to evolve in the future, have been created at Oxford University.  The research was led by Dr Paul Monk (Nuffield Department of Orthopaedics, Rheumatology and Musculoskeletal Sciences) and it has led to the creation of a computer model of a human skeleton, one that represents a possible individual living around the year 6017 AD.  This individual has been nick-named “Trillennium Man”.

The Research Team Plotted the Evolution of Key Tetrapod Joints 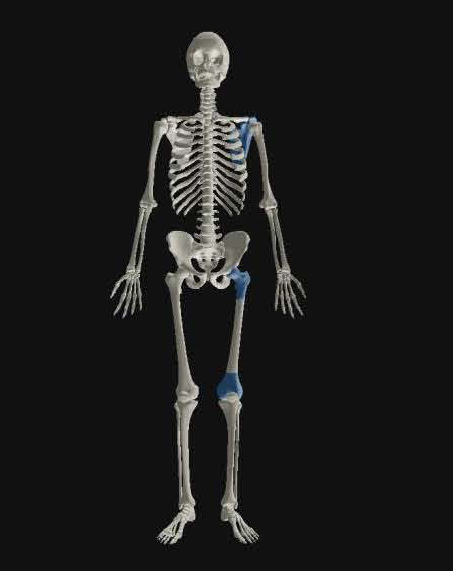 “Trillennium Man” plotting the evolution of key joints in the human body.

Dr Monk was interested in exploring why patients at his clinic presented with very similar orthopaedic problems.

“We see certain things very commonly in hospital clinics, pain in the shoulder with reaching overhead, pain in the front of the knee, arthritis of the hip, and in younger people we see some joints that have a tendency to pop out.  We wondered how on earth we have ended up with this bizarre arrangement of bones and joints that allows people to have these problems.  And it struck us that the way to answer that is to look backwards through evolution.”

A total of 224 bone specimens were scanned (CT scans), in order to assess how the human body and joints such as the shoulder, hip and knee have evolved and changed over time.  Specimens from the Smithsonian Institute (Washington) and the London Natural History Museum were used in this study.  Tetrapods involved in the research included members of the hominin tribe such as Homo ergaster and Homo erectus as well as a range of other fossils, including some that represent some of the very first terrestrial vertebrates to have lived.  The scans were than mapped using a computer programme to produce three-dimensional images to show how the bones and joints had changed.  This research has provided new insights into the morphological trends with common orthopaedic complaints such as shoulder pain and anterior knee discomfort.

The Bones of Australopithecus afarensis (Lucy) were Incorporated into the Study The fossilised bones of Lucy (approximately 40% of the skeleton).

By extrapolating the mathematical models, the research team could attempt to plot how our bodies and their key joints will evolve in the future.

“Throughout our lineage we have been adapting the shape of our joints, which leads to a range of new challenges for orthopaedic surgeons.  Recently there has been an increase in common problems such as anterior knee pain, and shoulder pain when reaching overhead, which led us to look at how joints originally came to look and function the way they do.  These models will enable us to identify the root causes of many modern joint conditions, as well as enabling us to anticipate future problems that are likely to begin to appear based on lifestyle and genetic changes.”

Both quadrupeds and bipeds were included in the study, the research even involved examining how dinosaurs with their digitigrade and semi-digitigrade stance evolved and changed over time.

Commenting on the significance of this research, Dr Monk concluded:

“Current trends reveal that the modern shapes of joint replacements won’t work in the future, meaning that we will need to re-think our approach for many common surgeries.  We also wanted to see what we’re all going to look like in the future, and to answer questions such as ‘are we evolving to be taller and faster or weaker’, and ‘might we be evolving to need hip replacements earlier in the future?’”

As our distant ancestors adopted a bipedal method of locomotion so the femur (thigh bone) changed.  The neck became gradually thicker to help support body weight.  The thicker the neck of the bone in the femur the greater the likelihood of arthritis in the hip joint.  Orthopaedics have suggested that this thickened neck of the femur might be a reason why our species is prone to hip problems. Neck of the hominin thigh bone has become broader to support our weight.

In the picture above, the proximal end of a human femur (H. sapiens), has been modelled using the CT scans (right) and this is compared to the model produced from scans of an early hominin (left).  The red arrows indicate the region of the neck of the thigh bone that has become thicker.

Everything Dinosaur acknowledges the assistance of the University of Oxford press room in the compilation of this article.