The next set of 2016 CollectA prehistoric animal models are due to arrive at Everything Dinosaur this week.  We thought we would post up some pictures of the new models, using some prototypes and samples we were sent a few weeks ago.  Coming into stock will be the beautiful horned dinosaur Mercuriceratops, the Tyrannosaurus rex corpse and the hunting T. rex.  In addition, dinosaur model fans will be able to purchase the new 1:40 scale Torvosaurus dinosaur model and the fantastic Deluxe (1:40 scale) Beishanlong.

New for 2016 Dinosaur Models from CollectA 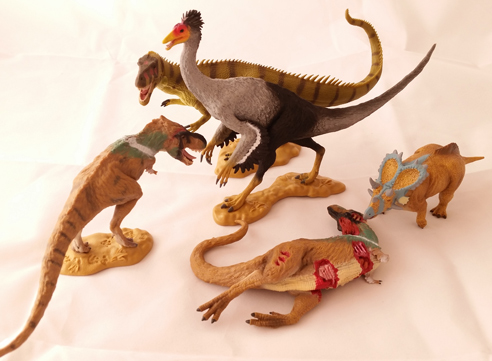 New models in the Deluxe and “Prehistoric Life” series.

The above picture shows the five new models that are due in at our warehouse in the next few days.  At the front there is the very detailed (and rather gory), Tyrannosaurus rex cadaver.  The bite mark on the thigh and the exposed ribs are a lovely touch and we are sure this figure will prove to be extremely popular with model makers and fans of dioramas.  Behind the T. rex body is our particular favourite, the beautiful Mercuriceratops (horned dinosaur) model.  In the centre, the splendid, grey and black Beishanlong (B. grandis), a member of the Ornithomimosauria (bird-mimic clade), can be seen.  This model has been painted in a colour scheme inspired by the Secretary Bird of Africa (Sagittarius serpentarius).  To the rear the 1:40 scale Deluxe Torvosaurus dinosaur model lurks and then to the left of the photograph the hunting T. rex can be seen.  They certainly are a very impressive collection.

The CollectA “Prehistoric Life” model range consists of over 130 models.  It is one of the most diverse of all the main stream model ranges available with all sorts of dinosaurs and prehistoric animals included within the series.  CollectA have built up a very strong reputation for the quality and finish of their model replicas. These are not the last of the 2016 models to be introduced by CollectA.  Later on in the year, Everything Dinosaur will be expecting delivery of four more replicas, two dinosaurs (one of which is another tyrannosaurid), one marine reptile and a model of an animal that is believed to have become extinct shortly before WWII.   These new models are:

The team members at Everything Dinosaur are really looking forward to welcoming all the new CollectA models into the fold.  Expect the Torvosaurus, Beishanlong, the two T. rex models and the Mercuriceratops to be available in just a few days time.

To view the range of scale prehistoric animal models made by CollectA: CollectA Deluxe Prehistoric World.