A team of international scientists based in the United States and Mexico have published a report declaring that a sixth mass extinction event is well under way and our species is running out of time to reverse this trend through conservation efforts.  Everything Dinosaur team members have written a number of articles on this blog about reports detailing the current rate of extinctions being recorded and the irreversible loss of ecosystems and biota.  This latest research takes a more conservative approach to calculating species loss than many earlier studies and this study focuses on the impact on vertebrates.  Even so, the team conclude that animals with back bones are becoming extinct more than 114 times faster than the “normal”, background extinction rate. Cataclysmic impact event that led to the extinction of the dinosaurs.

The fossil record suggests that there have been five major extinction events in the Phanerozoic Eon which represents the last 545 million years or so of our planet’s history.  The term Phanerozoic is derived from the Greek, for “visible life”, this reflects that the preserved fossilised remains of organisms become much more plentiful in rocks dated from 545 million years ago and younger.  Over this huge amount of time, there have always been extinctions.  Scientists are aware of the fact that there is a “background” level of extinction, but in this new research, the scientist report that amongst vertebrates the current trends suggest extinction rates 114 times faster than normal. 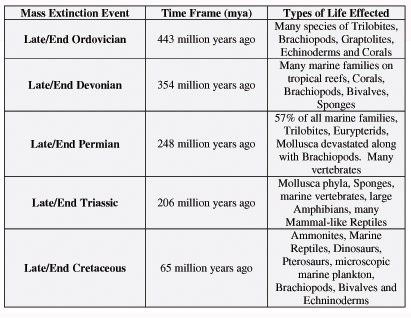 “We are now entering the sixth great mass extinction event.  If it is allowed to continue, life would take many millions of years to recover and our species itself would likely disappear early on.”

The report concludes that since 1900, more than four hundred species of vertebrates have died out.  Such a loss would normally occur over 10,000 years if extinction rates were at the normal, background level.  The rapid loss of biodiversity is put down to the effect of an increasing human population on our planet.   The number of humans living on our planet is estimated to have been around 1.9 billion in 1900, today, the human population is estimated to be around 7.325 billion, an increase of 385% over the last one hundred and fifteen years.  The expansion of urban populations, pollution, loss of habitats, deforestation and climate change are some of the reasons for the dramatically increasing loss of vertebrates according to the paper’s authors.

With the disappearance of key vertebrate species from an ecosystem, the other components such as insects and plant life will also be affected.   The report states that beneficial insects such as pollinating bees could be lost to humanity within three human generations.  The loss of these pollinators would have a huge impact on human food resources and place our own species Homo sapiens very much under threat.

To read an article written in 2014 about potential mass extinctions: Heading for a Sixth Mass Extinction?

The number of global mass extinction events preserved in the fossil record has been challenged recently.  Back in April of this year, Everything Dinosaur reported on a new study that suggested that there had been an additional, major extinction event around 260 million years ago in the Permian.  This extinction phase preceded the End Permian extinction event that is believed to be the most devastating extinction known from the Phanerozoic.  Some 95% of all life is believed to have died out.

To find out more: A Sixth Mass Extinction Event?