If we ever get back into cinemas (the ravages of COVID-19 notwithstanding), if the latest instalment of the “Jurassic Park/Jurassic World” franchise ever gets released, then movie goers will be treated to lots of scenes of scary-looking meat-eating dinosaurs flashing their huge teeth in their cavernous mouths at their luckless human victims.  Huge theropod dinosaurs such as Acrocanthosaurus, Giganotosaurus and T. rex might be famous for their big teeth, with serrations running along the edges, after all, we have all heard and probably used the term “steak knives”  to describe the shape of tyrannosaur teeth, but new research published in Biology Letters suggest that it was those tetrapods that were eventually to lead to the mammalian lineage that evolved such specialised tearing and cutting teeth first. Teeth that are laterally compressed, pointed and have serrated edges are known as ziphodont teeth (ziphodont dentition).  The teeth of Theropoda, the only clade of predominantly predatory dinosaurs, are characterised by ziphodonty, the presence of serrations (denticles) on their cutting edges (carinae).  Today, such dentition is only found in monitor lizards (varanids) but the fossil record reveals that this condition was much more pervasive in the past.

A team of researchers from Harvard University (USA), in collaboration with colleagues based at the universities of Manitoba, Alberta and Ontario (Canada), examined and compared the teeth from four types of extinct prehistoric hypercarnivore (an animal that gets at least 70% of its nutrition from the consumption of the flesh of other animals).

The teeth studied were:

The scientists identified the same denticles and interdental folds forming the cutting edges in the teeth of the Permian gorgonopsid (L. ornatus), as those seen in members of the Theropoda.  The researchers conclude that these tooth features, specifically adaptations to assist with the processing of meat, first appeared in the non-mammalian synapsids.  Comparisons of tooth serrations in gorgonopsians with those of earlier synapsids and hyper carnivorous mammals reveal that some gorgonopsians acquired a complex tissue arrangement that differed from other synapsids,

Plotting the Serrations in Non-mammalian Synapsids In 2015, Everything Dinosaur published an article on research into the Theropoda that looked specifically at the interdental folds associated with their teeth.

To read this article: Research to Get Your Teeth Into.

For an article from 2014 that looked at the ziphodont teeth of members of the Dimetrodon genus: Dimetrodon with “Steak Knife” Teeth.

This new study demonstrates that similar types of teeth evolved in different types of hypercarnivores that were not closely related.  This is an example of convergent evolution and the ziphodont teeth of the non-mammalian synapsids represent the earliest record of this adaptation and indicate that the first iteration of this morphological feature appeared long before the Dinosauria evolved. 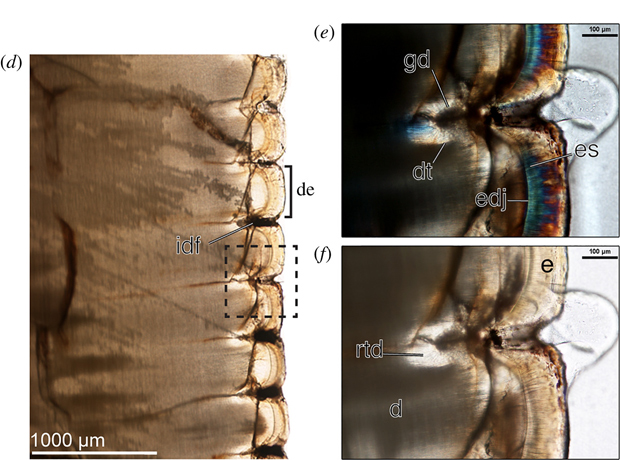 Thin section through distal serrations of NHCC LB334 displaying both interdental folds and denticles (d).  Dashed box indicates location of high magnification images in both plain (e) and cross polarized light (f).  Both (e) and (f) highlight features of the denticles and interdental folds including the enamel spindles that cross the enamel.

The scientific paper: “Convergent dental adaptations in the serrations of hypercarnivorous synapsids and dinosaurs” by M. R. Whitney, A. R. H. LeBlanc, A. R. Reynolds and K. S. Brink published in Biology Letters.