Everything Dinosaur team members conclude their review of their favourite blog articles of 2020 by looking at articles and news stories that were posted up between July and December.  With the best part of 180 posts to choose from selecting our favourite six for this period was quite tricky.  The ones we have selected demonstrate the broad range of topics we cover on the Everything Dinosaur weblog.

To view our earlier article about our favourite posts in the first half of the year: Favourite Blog Posts of 2020 (Part 1).

We might have been in the middle of a global pandemic but Everything Dinosaur team members kept up their blogging reporting upon tiny theropod eggs from Japan, a revision of Dilophosaurus and a number of new dinosaurs.  Our favourite post of the month concerned the scientific description of Aratasaurus museunacionali, a basal member of the Coelurosauria from Brazil.  The genus name translates as “lizard born of fire”, a reference to the terrible fire that ripped through the National Museum of Brazil where the fossil specimen was kept. 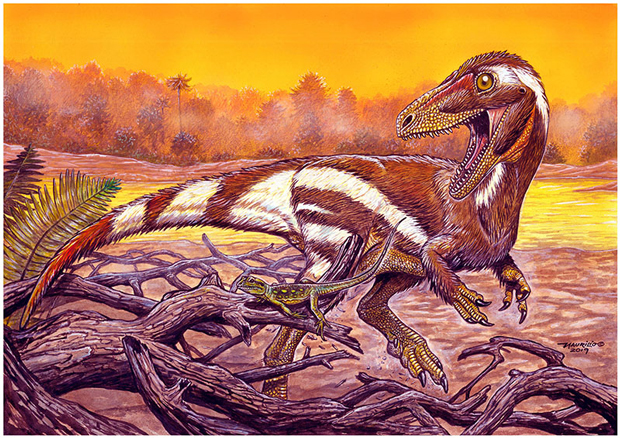 The controversy over the naming of the smallest dinosaur based on a skull preserved in amber from northern Myanmar rumbled on.  In August, a paper was published that refuted claims that the tiny skull of the animal named Oculudentavis khaungraae was that of an archosaur.  A month earlier (July 2020), the original scientific paper describing this remarkable fossil was retracted.

The Tiny Fossil Skull Preserved in Amber from Myanmar – But is it a Dinosaur? To read more about O. khaungraae: Smallest Dinosaur Preserved in Amber a Lizard.

September: Doctor Who Meets a Trilobite

The Oxford University Museum of Natural History celebrated its 160th birthday, the Monsters of the Deep exhibition opened in the midst of the chaos caused by COVID-19 and Euparkeria got a makeover. Our favourite post of September concerned a new species of trilobite (Gravicalymene bakeri) from Tasmanian that was named after Doctor Who actor Tom Baker.

A Photograph of a Gravicalymene bakeri Trilobite Fossil with Line Drawing To read more about “Doctor Who and the Trilobites”: Newly Described Species of Trilobite Named after Doctor Who Actor.

In October we reported on the mapping of the genome of the Scimitar-toothed cat Homotherium latidens, discussed a new species of mosasaur from Morocco and the diet of pterosaurs, but our favourite article concerned the research into ancient dog DNA.  The study suggested that the diversity observed between dogs in different parts of the world today originated when all of mankind were hunters and gatherers. To read the article: DNA Study Highlights Ancient Relationship Between Humans and Dogs.

November – Dinosaurs from the Emerald Isle

In November, Everything Dinosaur celebrated publishing its 5,000 blog post, discussed Kholumolumo a dinosaur from an African rubbish dump, looked at seal evolution and got to grips with the earliest Paranthropus robustus skull described to date.

Our favourite post concerned the first dinosaur remains reported from Ireland, not just one dinosaur but two!

First Evidence of Dinosaurs from Ireland Dr Mike Simms (National Museums Northern Ireland) holds the theropod tibia on the left and the thyreophoran femur on the right.

Picture Credit: The University of Portsmouth

To learn more about the Irish dinosaurs: The First Dinosaur Remains from Ireland.

As the year closed, in the final month of 2020 we looked at how interactive “I-books” were helping to explain archaeology, examined a very flashy new dinosaur (U. jubatus), the first sauropod dinosaur from Switzerland (Amanzia greppini) and studied Parasaurolophus pathology.

Our favourite post concerned the establishment of a new species of Late Jurassic ichthyosaur after the discovery of fossil bones by the wonderful Dr Steve Etches MBE, the founder of the amazing Etches Collection museum in Dorset. To read more about Thalassodraco etchesi: A New Taxon of Late Jurassic Ichthyosaur is Described.

This concludes our review of the blog posts that we have researched and written up over the last twelve months.  Which one is your favourite?