A Video Review of “Dinosaurs – how they lived and evolved”

“Dinosaurs – how they lived and evolved” Video Review

Everything Dinosaur Facebook fans and followers will know that recently we ran a special competition to win one of three signed copies of the new dinosaur book by Darren Naish and Professor Paul Barrett.  The contest may have drawn to a close but for those of you not lucky enough to win one of the “Dinosaurs – how they lived and evolved”, we have produced a short video, providing a brief overview of this excellent publication.

A Whizz Through “Dinosaurs – how they lived and evolved”

In our short video review, we highlight “Dinosaurs – how they lived and evolved”, a book originally published in 2016, but this edition has been updated and revised.  Conveniently split into six comprehensive chapters, starting with an introduction to the Dinosauria and concluding with the End-Cretaceous mass extinction event that saw the demise of the non-avian dinosaurs.  The final chapter also looks at those theropods that survived the extinction event – the birds.  This well-written book briefly highlights the diversity of the birds but also leaves the reader in no doubt that the Aves suffered extinctions at the end of the Mesozoic.

As well insightful writing, the book features the work of famous artists such as John Sibbick, Davide Bonadonna, Bob Nicholls and Mark Witton.

Picture Credit: Everything Dinosaur (from Dinosaurs – how they lived and evolved)

Aimed at the general reader with an interest in the Earth sciences and especially palaeontology, this new publication is eminently suitable for teenagers and above.  It is crammed full of fascinating information and provides a comprehensive overview of dinosaurs, with many detailed illustrations and cladograms provided by Darren Naish (University of Southampton).  Look out for amazing artwork produced by such luminaries as Bob Nicholls, Davide Bonadonna, Mark Witton, John Sibbick and Dr Julius Csotonyi (pronounced Chit-en-Knee).  It was Bob Nicholls who created the fascinating illustration of a ginkgo-chewing heterodontosaurid (Tianyulong confuciusi) that features on the front cover. Artwork by the very talented Bob Nicholls features on the front cover of “Dinosaurs – how they lived and evolved”.

An illustration of Sinosauropteryx prima 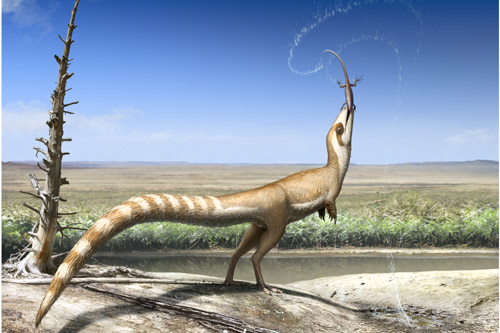 An illustration of Sinosauropteryx with its countershading and “bandit mask” produced by Bob Nicholls, just one of large number of superb illustrations and examples of palaeoart included in the book.

Everything Dinosaur Facebook fans and followers will probably remember that we recently ran a special competition to win one of three signed copies of this brilliant dinosaur book.  Co-author Darren Naish had produced a personalised drawing on the inside front cover of each of the prizes that Everything Dinosaur gave away in their free to enter contest.

A Personalised and Signed Dinosaur Illustration on the Inside Front Cover A sketch of the primitive oviraptorosaur Caudipteryx by Darren Naish.  Lucky Everything Dinosaur competition winners received a personalised and signed copy of this dinosaur book.