Is this the Demise of a Duck-billed Dinosaur?

Five years ago, Everything Dinosaur reported the naming of a new species of duck-billed dinosaur that lived well inside the Arctic circle during the Late Cretaceous.  The dinosaur was named Ugrunaaluk kuukpikensis (pronounced 00-grew-na-luck kook-pik-en-sis).  At the time of publication, Ugrunaaluk was thought to be closely related to Edmontosaurus.  Since then, there has been quite a debate regarding the taxonomic validity of Ugrunaaluk.  In the latest twist of a tale set in prehistoric polar latitudes, researchers writing in PLOS One conclude that this Arctic dinosaur is most probably a species of Edmontosaurus.

The Taxonomic Validity of the Arctic Hadrosaur Ugrunaaluk kuukpikensis is Challenged The taxonomic validity of Ugrunaaluk kuukpikensis is controversial as this species was erected based on the study of the bones of immature, not fully adult individuals.

Duck-billed dinosaur fossils from the Liscomb Bonebed (Prince Creek Formation, North Slope, Alaska), were the first dinosaur bones discovered from the Arctic.  When originally assessed, it was proposed that these hadrosaurids were Edmontosaurus, members of the sub-clade Hadrosaurinae.  In 2015, a scientific paper was published that proposed the closely related species Ugrunaaluk kuukpikensis.  However, the taxonomic status of this material is problematical.  The fossils associated with the Liscomb Bonebed site represent immature, sub-adults and as such many of the anatomical traits used to characterise U. kuukpikensis, may reflect the developmental age of the individual and the shape of the bones may have altered as the dinosaur grew and matured.

A Model of an Adult Edmontosaurus

Looking at the Evidence

In this newly published paper, researchers from Okayama University of Science (Japan), the Perot Museum of Nature and Science (Texas) and Hokkaido University Museum (Japan), re-examined the skull bones from the Liscomb Bonebed and determined that the traits used to distinguish these Arctic fossils from those ascribed to Edmontosaurus were questionable.  In 2015, the scientific paper describing Ugrunaaluk kuukpikensis (Mori et al), proposed eight diagnostic characters for this new species.  Among the eight characters identified, three were proposed to distinguish Ugrunaaluk kuukpikensis from the Edmontosaurus genus.  Four of these eight characters distinguished Ugrunaaluk from Edmontosaurus annectens, which is known from Maastrichtian aged deposits from Montana and one character to distinguish Ugrunaaluk from the geologically older Edmontosaurus regalis, fossils of which are found in Canada.

It is likely that the shape of the skull of Edmontosaurus changed as it grew.  The bones forming the skull would also undergo change in shape and size, because of this, any taxon erected solely based on the shape of skull bones from young animals is questionable.  In this newly published paper, the researchers, which include Ryuji Takasaki, a researcher at the Okayama University of Science and Professor Yoshitsugu Kobayashi (Hokkaido University Museum), conclude that the Liscomb Bonebed hadrosaurid material should be ascribed to Edmontosaurus. A study of skull bones from the Prince Creek Formation (Alaska), suggests that the immature individual duck-billed dinosaurs found at this site are from the Edmontosaurus genus and that Ugrunaaluk kuukpikensis should be regarded as nomen dubium.

Furthermore, if Edmontosaurus is associated with the very far north of Laramidia, this has implications for the ancestry of Late Cretaceous Asian hadrosaurids.  A number of duck-billed dinosaurs found in Asia may represent descendants of the Edmontosaurini lineage that migrated from Laramidia into Asia.

The Distribution of Edmontosaurus sp. 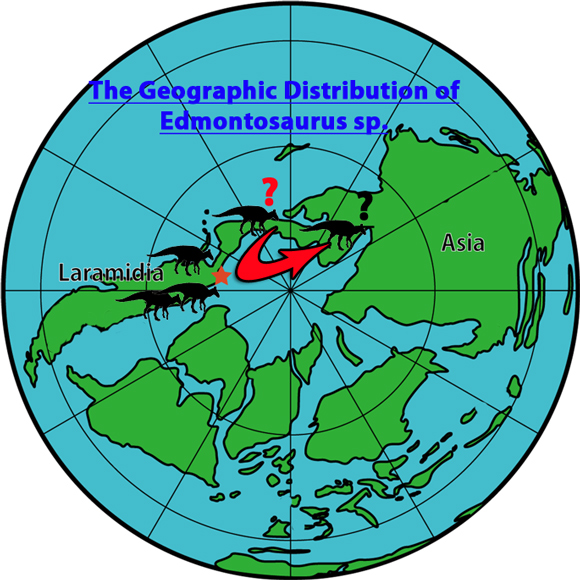 The researchers suggest that Edmontosaurus was geographically very widespread occupying much of northern Laramidia and many of the Late Cretaceous Asian hadrosaurs may have been descended from the Edmontosaurus lineage.

Picture Credit: Scientific Reports with additional annotation by Everything Dinosaur

The map (above), illustrates the distribution of Edmontosaurus as proposed by the research paper.  There is some evidence to suggest that Edmontosaurus preferred coastal environments and that this genus was widely distributed across northern Laramidia during the Late Cretaceous.  If this assessment proves to be correct, Edmontosaurus had a geographical distribution spanning about 4,000 kilometres from north to south in North America.

The scientists speculate that the ancestor of Asian hadrosaurids such as Kamuysaurus migrated from North America.

“It is possible that the ancestor of Kamuysaurus that adapted to the environment at the northern limit of the species’ habitat crossed from North America to Asia and eventually evolved to Kamuysaurus.”

To read Everything Dinosaur’s article on the naming of Kamuysaurus: Famous Fossils from Japan are Named.

If the Prince Creek Formation hadrosaurs are established as members of the Edmontosaurus genus, then they could represent a new species of Edmontosaurus.  The large latitudinal distribution of this taxon could be re-established, the latitudinal range for Edmontosaurus would extend from about 40 degrees north to at least 70 degrees north.  The researchers conclude that despite the extensive geographical and temporal range of this taxon, the morphological disparity within different species associated with this genus is relatively small when compared to other members of the Hadrosaurinae.  The lack of any substantial anatomical differences between widely distributed species could reflect the relatively low latitudinal temperature gradient during the Late Cretaceous compared to today.  A relatively benign and unchanging environment would not have imposed significant pressure on species to evolve in order to adapt to new conditions.

To read our original article on the naming of Ugrunaaluk kuukpikensis: The Latest Dinosaur from Polar Latitudes.

Our article published in 2017, following a study of Edmontosaurus cranial material that also cast doubt on the taxonomic validity of U. kuukpikensis: Studying the Skulls – Getting our Heads Around Edmontosaurus.

The scientific paper: “Re-examination of the cranial osteology of the Arctic Alaskan hadrosaurine with implications for its taxonomic status” by Ryuji Takasaki, Anthony R. Fiorillo, Ronald S. Tykoski and Yoshitsugu Kobayashi published in PLOS One.