Today, Everything Dinosaur in collaboration with our friends at CollectA publish part 5, the final part in our series of articles announcing new CollectA prehistoric animal models for 2020.  Fittingly, in this fifth and final blog article we have five new figures to announce: CollectA will add a fourth pterosaur to their CollectA Deluxe (Supreme) range in 2020.  The Caviramus model will have an articulated lower jaw and it demonstrates all those weird and wonderful features that have left palaeontologists scratching their heads since this flying reptile was formerly named and described in 2006

Everything Dinosaur congratulates CollectA on introducing such a fascinating and untypical member of the pterosaur family into their model range. CollectA Redlichia rex trilobite model.  Like other recently announced new for 2020 CollectA models this replica was requested by a German museum and dinosaur theme park.

Wandering the seabed of what is now Australia some 513 million years ago, was a very large trilobite.  Redlichia rex was twice as big as other trilobites known from the Emu Bay Shale on Kangaroo Island (South Australia), the largest specimens are around thirty centimetres long.  It has been suggested that this trilobite specialised in hunting smaller trilobites it may have been a cannibal.  Named and described this year (2019), the species name “rex”, which means “king”, refers to its large size and predatory nature, reminiscent of Tyrannosaurus rex, which lived some 447 million years later.

The CollectA Orthoceras Model (New for 2020) A model of a straight-shelled nautiloid (Orthoceras), will be added to the CollectA range.  Long before vertebrates became large enough to become apex predators, there was an evolutionary “arms race” between the Arthropoda and Mollusca.  Powerful armoured sea scorpions (eurypterids), such as Megalograptus did battle with giant orthoconic nautiloids.  Orthoceras was one such predator, a cephalopod and an active hunter of Ordovician seas some 465 million years ago.  They are only very distantly related to the living spiral shelled nautilus.

On the subject of nautiloids… 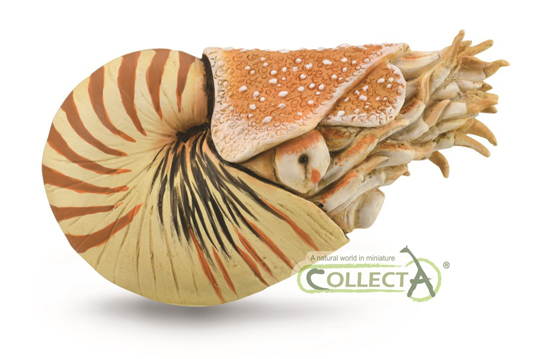 As with the trilobite, the Orthoceras and the ammonite/belemnite/horseshoe crab, CollectA figures discussed last week, this nautilus replica has been requested by a German museum and dinosaur-themed park.  Once described as a “living fossil” scientists now believe that extant forms are not that closely related to prehistoric lineages.  As for the large, chambered-shelled N. pompilius, its fossil record dates back to the Pleistocene Epoch.

The New for 2020 CollectA Grey Diplodocus The last of the five models for today, the final model to be announced for 2020, is a dinosaur.  This is very appropriate for a company that has forged such a strong reputation for its dinosaur figures and replicas.  CollectA will be introducing a new colour variant of its popular rearing Diplodocus dinosaur model.  Many collectors have requested a new colour scheme for this figure, the muted tones provide a fascinating contrast to the original CollectA rearing Diplodocus that was introduced in 2013.

To read the fourth part in this series: New CollectA Models (Part 4).