A team of researchers based at the University of Alberta have published a scientific paper that might just turn some assumptions when it comes to naming a new dinosaur species on their head.  Cranial fossil material can provide palaeontologists with important indicators that can help them establish that a newly found fossil represents a new species.  Often it is the skull and jaws that provide the important morphological evidence to help palaeontologist establish taxonomic relationships between genera.  However, the mainly University of Alberta-based team challenge some of these assumptions, all thanks to “Hannah” a Styracosaurus skull named after one of the researcher’s dogs.

Palaeontologist Scott Persons with “Hannah” the Styracosaurus and his Dog Hannah 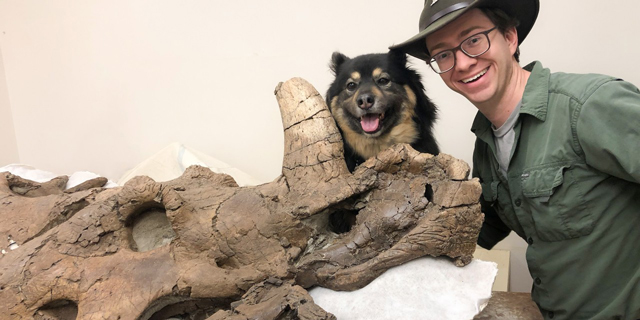 Scott Persons with “Hannah” the Styracosaurus and his dog.

In 2015, a field team working in the Dinosaur Provincial Park of southern Alberta uncovered the skull of a five-metre-long horned dinosaur (Styracosaurus).  Nothing too unusual so far, after all this spiky-frilled horned dinosaur was scientifically described based on an almost complete skull (the type specimen), found in the Dinosaur Provincial Park, but Hannah’s skull was different – very different!  It is not symmetrical, the left half of the skull looks different from the right half – cue concerns being raised over how dinosaur genera and species are erected.

Co-author of the scientific paper published this week in the journal “Cretaceous Research” Scott Persons commented:

“When parts of one side of the skull were missing, palaeontologists have assumed that the missing side was symmetrical to the one that was preserved.  Turns out, it isn’t necessarily.  Today, deer often have left and right antlers that are different in terms of their branching patterns.  This fossil shows dramatically that dinosaurs could be the same way.”

The well-preserved Styracosaurus skull (UALVP55900), has cranial imperfections that could change how palaeontologists identify new species of dinosaurs.  Differences in the shape of horned dinosaur’s skulls and their bony frills have been noted before, after all, there is variability recorded in fossils assigned to a species due to differences in age, in growth stages and from the effects of pathology.  In this case, the Styracosaurus called “Hannah” demonstrates previously unrecorded differences between the left side and the right side of the skull.  As with the type specimen collected by the famous scientist C H. Sternberg, the right lateral parietal bar (the right side of the skull frill) has seven bony projections (epiossifications), but the left parietal bar is not symmetrical it has eight epiossifications!

A Computer Rendered Image Showing the Skull of the Styracosaurus The skull (UALVP55900) is shown in right lateral view (top) and left lateral view (middle).  The dorsal view (bottom) shows the clear differences in the shape of the left and right sides of the skull (asymmetry).

The differences are so marked, that if the scientists had found only isolated halves, they could have concluded that each half represented a different horned dinosaur species.

Lead author of the study, Robert Holmes (University of Alberta), explained that “Hannah” shows that the pattern of a dinosaur’s horns could vary so much from one side of the skull to the other.  This raises doubts over the validity of some species such as Rubeosaurus ovatus.  Rubeosaurus was originally described as a species of Styracosaurus (1930), based on a single parietal bone (part of the skull frill), collected in the Two Medicine Formation of Montana.  This fossil and a second more complete skull fossil found in 1986, were subsequently reviewed and the genus Rubeosaurus (R. ovatus) erected in 2010.

Thanks to Hannah, it looks like the research undertaken in 1930 was right, the authors of the newly published paper suggest that Rubeosaurus ovatus is a junior synonym of Styracosaurus.

What are the Implications for the Naming of Dinosaur Species? A drawing of an asymmetrical skull (Styracosaurus albertensis).  In our illustration the epiossifications associated with the skull frill are asymmetrical.

Since working on the paper, Scott Persons has moved on, becoming a professor and museum curator at the College of Charleston.  He may have had to leave “Hannah” the Styracosaurus behind but we presume Hannah the dog is still with him.

“Hannah the dinosaur is named after my dog.  She’s a good dog, and I knew she was home missing me while I was away on the expedition.”

Despite the nickname, palaeontologists are not able to determine whether specimen number UALVP55900 represents a male or a female Styracosaurus.

Everything Dinosaur acknowledges the assistance of a press release from the University of Alberta in the compilation of this article.