Scaling the Heights of Feather Evolution

Birds and alligators might look very different, but they are related, belonging to the Archosauria clade, that diverse and extensive group of diapsids that dominated life on Earth during the Mesozoic. There are a number of groups of reptiles that are more closely related to birds than alligators, for instance there is the Dinosauria.  At least dinosaurs and birds belong to the same sub-clade of the Archosaurs (the Avemetatarsalia), whereas, in contrast, alligators and their crocodilian cousins are placed in the other major sub-clade of the Archosaurs – the Crurotarsi.

Numerous Feathered Dinosaur Have Been Described – But How Did Feathers Evolve? 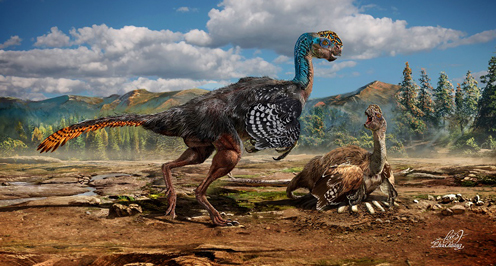 A new feathered dinosaur from China, but how did feathers evolve from the scales of reptiles?

Most scientists believe that feathers evolved primarily for insulation or display and that powered flight was secondary.  Over the last two decades or so, there have been remarkable dinosaur fossil discoveries, mainly from the Cretaceous deposits in Liaoning Province (north-eastern China), that have revealed a myriad of different types of feathered dinosaur, but the mechanism for feather evolution was poorly understood.  For example, many different types of feather-like structures have been identified in the fossil record, the famous Archaeopteryx (A. lithographica) from the Upper Jurassic limestone deposits of Solnhofen, Germany, has asymmetrical flight feathers, very similar to those found in living birds.  These feathers are more complex than those seen in non-avian, non-volant dinosaurs of the Jehol Biota, that lived some 30 million years after Archaeopteryx was flying around. Picture Credit: Helmut Tischlinger with additional labelling by Everything Dinosaur

What are Feathers and Reptile Scales Made Of?

The feathers of birds and the scales of reptiles are essentially, made of the same protein – keratin.  However, there are subtle differences in the composition of the keratin that makes up feathers and scales.  It has been known for more than ten years, that the type of keratin that forms feathers is present in embryonic alligator scales.  This form of feather-forming keratin, is suppressed by the expression of genetic information during the embryological development of the alligator, and as a result, as far as we at Everything Dinosaur know, the form of keratin that leads to feathers has not been detected within the dermal scales of adult crocodilians.  The presence of this homologous keratin in both chicks and alligators suggests that this trait was inherited from a common ancestor, a member of the Archosaur clade (Archosauriformes), that existed prior to the evolution of the two basic types of Archosaur based on their ankle bones (Avemetatarsalia and the Crurotarsi).

An Evolutionary Heritage Embedded in the DNA of Living Archosaurs

A team of scientists, led by researchers from the University of Southern California have started to unravel the genetic mechanisms that dictate how the outer skin and related tissues of living Archosaurs is formed.  They have been able to focus in on the variety of genes that are involved in scale and feather development.  The scientific paper detailing this research has been published in the academic journal “Molecular Biology and Evolution”.

“We now have a potential molecular explanation for these hypothesised missing links.  Our analyses led to the identification of five morpho-regulatory modules that are essential for modern feather formation.  We propose that these modules may originally evolve as different strategies for better adaptation.  Eventually, the integrative combination of five morpho-regulatory modules achieves the highly successful feather architecture today, allows the Aves class to claim most of the open sky as their ecological niche.”

In this study, the scientists first mapped the genes of developing chicks and embryonic alligators to identify the differences in gene expression between the two Archosaurs and to pin-point the key genes involved in the formation of feathers or scales.  Once this phase of the research had been concluded, the team then placed the genes associated with feather development in chicks into alligator eggs to see if the alligator genes for scales could be overridden by switching on the chicken feather genes.

In addition, the gene replacement led to the identification of several intermediate types of shape from scales to more complex forms of filamentous feathers.  Some of the shapes identified resemble the filamentous appendages associated with feathered dinosaur fossils, whilst other shapes formed have similar characteristics to those found in the feathers of modern birds.  This research has provided a further insight into how a new organ might evolve and has significantly increased the list of genes and molecules known to influence feather development.  It has also highlighted the growing role of developmental biology and genetic mapping when it comes to interpreting the fossil record.

To read a recent article on the discovery of a troodontid dinosaur with pennaceous feathers: Chinese Dinosaur with Pennaceous Feathers