A fossil tooth of a giant, prehistoric whale found on a beach by an amateur fossil hunter has provided scientists with further evidence of monstrous whales that once ruled the oceans of the world.  The tooth, which weighs around three kilogrammes and measures a whopping thirty centimetres in length is not even complete, the tip of the crown is missing and the base of the root has broken off.  However, it is easily the biggest fossil tooth ever found in Australia. The fossil was discovered back in February by Murray Orr as he explored the famous Beaumaris Bay area to the south-east of Melbourne (Victoria).  The sandstone cliffs and foreshore of this bay represent sandstone deposits laid down between ten and five million years ago in an estuarine and marine environment.  The strata preserves fossils of a huge number of invertebrates as well as the fossilised bones of penguins, ancient seals, sharks and other fishes.  The bones of giant birds have also been found along with fossils representing terrestrial marsupials whose bodies must have been washed down the Yarra River and out to sea.

Such is the importance of the Beaumaris Bay area and the Pliocene-aged strata that a lobby group has been formed to help preserve the two mile long beach area by awarding it UNESCO World Heritage status.

The tooth is estimated to be around five million years old and would have come from a Cetacean similar to the giant of Peru – Livyatan melvillei, formerly known as Leviathan melvillei.

To read about the discovery of L. melvillei: The Nightmare Whale from Prehistory

Although the teeth are very similar, it is unlikely that the Australian tooth represents the same genus, as the Peruvian fossil material has been dated to around 12 million years ago, so the Beaumaris Bay specimen is considerably younger.  The tooth is internationally significant, as it represents the first evidence of massive sperm whales present outside the Americas.  The tooth is indeed immense and dwarfs a tooth from the jaw of an extant Sperm Whale (Physeter macrocephalus).  It even makes the teeth of Tyrannosaurus rex look quite dainty in comparison. The picture above provides a comparison between the tooth of a Tyrannosaurus rex (left), the extinct fossil whale (centre) and a modern-day Sperm Whale (Physeter macrocephalus) on the right. Estimated size of toothed whale based on the fossil tooth – around 18 metres.

Although it is difficult to provide an accurate estimate of size based on a single tooth, it has been suggested that this whale could have reached lengths in excess of eighteen metres and it might have weighed some forty tonnes.  Murray Orr has donated his remarkable fossil find to Museum Victoria, thanking Mr Orr for his kind donation, the museum’s senior curator of vertebrate fossils, Dr. Erich Fitzgerald stated:

“It’s a first for the entire continent of Australia and it’s a fossil of a whale that has never thought to be here before.”

Dr. Fitzgerald is no stranger to the Beaumaris Bay area and he has worked on a number of important fossil discoveries from this area.  For example, back in 2013, Everything Dinosaur reported on the discovery of the first seal bones from this locality: Australia’s First Seal – A Pliocene Pinniped.

Fossils from Beaumaris Bay have even proved that giant, toothed birds once flew Australia’s coastline: Giant Toothed Birds Once Soared Over Australia

As the fossil is believed to be around five million years old, it is the youngest known fossil of a whale-eating Sperm Whale.  Extant Sperm Whale males can reach fifteen metres in length and they are predators but they only have teeth in their narrow, lower jaw.  They specialise on feeding on squid and fish, the fossil tooth indicates that in the southern hemisphere giant marine, super-predators were geographically widely dispersed.

“It is a truly remarkable find and this discovery once again shows the important contribution that amateur fossil hunters can make to science.  As for naming this beast, it would be hard to erect a new genus from a single fossil tooth but precedence has been set before.  Perhaps we should refer to this simply as “Murray’s Monster”, after all, given the size of the tooth, albeit missing part of the root and the tip of the crown, this toothed whale really was a monster!”

The Beaumaris Bay area of Melbourne provides a remarkable insight into the ancient fauna of Australia.  Giant marsupials roamed the estuary with seals and ancient penguins basking on the beach, whilst flying overhead giant toothed birds soared out to sea, where perhaps a massive toothed whale lurked offshore to pick off any unwary seals.

An Illustration of Beaumaris Bay During the Pliocene 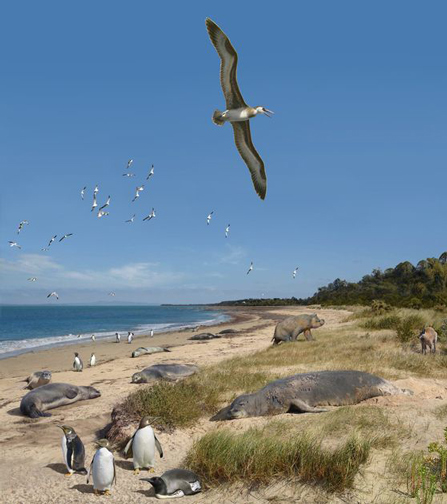