Everything Dinosaur has received reports from Chinese news agencies that a dinosaur exhibit in the Zhucheng Dinosaur Museum (Shandong Province, China), has been recognised by the Guinness World Records organisation as being the largest hadrosaurid skeleton on display.  The duck-billed dinosaur skeleton is part of an exhibit showing a herd of Shantungosaurus dinosaurs in the entrance area of the huge museum.  In the press release, the dinosaur is referred to as Zhuchengosaurus maximus, but this is regarded as a junior synonym of Shantungosaurus giganteus, the mounted skeleton stands 9.1 metres high and is 16.6 metres long.

Part of the Shantungosaurus Dinosaur Exhibit at the Zhucheng Dinosaur Museum

The magnificent Shantungosaurus dinosaurs on display in the entrance hall at the Zhucheng Dinosaur Museum.

Largest Biped to Have Ever Lived?

With the recent hypothesis that Spinosaurus (S. aegyptiacus) was a quadruped and incapable of walking on its hind legs, Shantungosaurus, is regarded by many palaeontologists as a facultative biped (able to walk on its hind legs if it wished to) and as such, the largest biped known to science.  Body length and body mass estimates are difficult to calculate, but the mounted exhibit examined by the Guinness Book of Records, exceeds fifty-four feet in length, and one of the neighbouring Shantungosaurus mounts at the museum is almost as long.  As for bodyweight, estimates vary, but Gregory Scott Paul has estimated that this dinosaur could reach weights in excess of fifteen tonnes, that’s getting on for being twice as heavy as a T. rex!

An Illustration of the Giant Hadrosaur Shantungosaurus giganteus 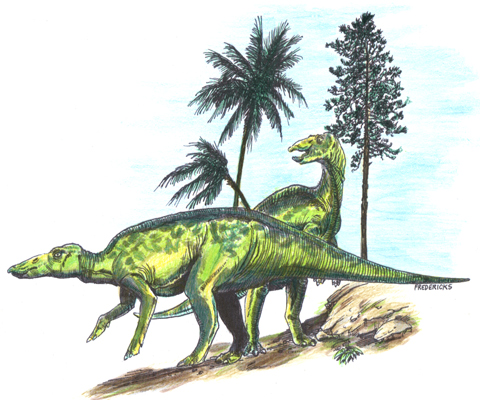 Perhaps the largest biped to have ever lived – Shantungosaurus giganteus,

The Zhucheng Dinosaur Museum is one of the largest museums dedicated to the Dinosauria anywhere in the world.  It celebrates the rich fossil heritage of Shandong Province and Shantungosaurus giganteus was named in honour of this coastal province in eastern China.  The record breaking exhibit, does not represent a single, individual animal.  When remains of the giant Ornithischian dinosaur that was to be named Shantungosaurus were first found in the mid 1960’s, fossils from at least five individuals were found together in an extensive bone bed.  Although, none of these specimens represented a complete skeleton, the bones (and casts of missing fossils) could be assembled into a single mount.

A Scale Drawing of the Duck-Billed Dinosaur S. giganteus A scale drawing of Shantungosaurus.

Named in 1973, Shantungosaurus lived during the Late Cretaceous and it is one of a number of Ornithischian dinosaurs known from this part of the Wangshi Formation of eastern China.  A second, equally sized hadrosaurid was described in 2007 – Zhuchengosaurus maximus and the Chinese press agency referred to the record breaking exhibit using this nomenclature.  However, Z. maximus, named and described in 2007, is probably a junior synonym of Shantungosaurus giganteus.  Anatomical features used to distinguish the fossils as a separate species when Z. maximus was named in 2007 were later to be found to be related to ontogeny (different aged animals with differences in growth).  A similar fate befell a third giant Hadrosaur Huaxiaosaurus (H.aigahtens), it too is now regarded as a junior synonym of Shantungosaurus.

Whatever the position regarding the validity of these other genera, it is certain that this part of China in the Late Cretaceous was home to some truly huge duck-billed dinosaurs, why these animals grew so big remains a mystery.  Perhaps an abundance of food resources permitted larger and larger generations, or maybe a larger size helped avoid predation?  The naming of a new genus of tyrannosaurid (Zhuchengtyrannus magnus) in 2011 may help explain the reason for the very large size of these particular duck-billed dinosaurs.

To read an article about the discovery of Zhuchengtyrannus: A New Species of Tyrannosaur from China