Everything Dinosaur to the Rescue

Today, we were telephoned by a teacher based in Oxfordshire who had a bit of a problem.  She had booked a dinosaur workshop (not us) and they had let her down at the last minute, so she was trying to ring round and find another company to step into the breach at short notice.  Unfortunately, all our dinosaur and fossil experts were already booked for the day in question (we tend to get booked up months in advance), but not too worry we set about sorting resources and providing some useful contacts from our vast database of fossil experts and outreach specialists.

Within twenty minutes of the phone call, we had emailed over information on who to talk to with regards to a dinosaur themed presentation.  In addition, the first of our teaching materials all about Mary Anning, ammonites and sharks teeth were emailed across.  By 9pm that evening the teacher had received several ideas for her teaching work, including example lesson plans and other helpful items.  We even sent over fact sheets and drawing materials to support her scheme of work that involved learning about what fossils tell us about life in the past.

The Children Will be Learning About Ammonites

We explained that the Everything Dinosaur teaching blog has lots of articles on dinosaur teaching in schools, lesson plan suggestions, features on Mary Anning, learning through creative play and so on.  This would also prove to be a valuable and inspirational resource.  In addition to the fossil fact sheets and drawing materials we provided a helpful pronunciation guide:

After purchasing some useful teaching resources, from the Everything Dinosaur website, Everything Dinosaur something like thirty items of around £18.00 including VAT and first class postage, we emailed over the “she sells sea shells tongue twister” to support teaching about the famous fossil hunter Mary Anning and a helpful pdf document to help the teaching team identify dinosaurs.

What is a Dinosaur?  Dinosaurs Defined

Special hips and an upright stance help to define dinosaurs.

The grateful teacher emailed to say:
“I have just received all your emails, they look great, these are very useful documents.  You have been so helpful.”

Everything Dinosaur is a small team of very dedicated people, if you like our service and the support we provide fellow teachers, perhaps if you are on a teaching forum or network, you could post up our website address: Everything Dinosaur

Scientists including researchers from Flinders University (South Australia), have solved the mystery of an extinct flightless bird that once roamed the island archipelago of New Caledonia.  For the first time, the post cranial skeleton has been reconstructed using fossils from a number of cave sites, however, the strange heaps found on the island may not have been nesting mounds created by this large bird, the mounds remain a mystery.

The bird named Sylviornis neocaledoniae, was about the size of a Dodo, but with much longer legs and a longer neck, large individuals may have reached 80 centimetres tall and weighed as much as 34 kgs.  It survived on these isolated islands until very recently, there is evidence to suggest that these birds were around 2,500 years ago.  The arrival of humans in New Caledonia led to the extinction of Sylviornis, but a mystery remained.  Large earth mounds were believed to be nesting sites excavated by these flightless birds but an analysis of foot bones reveals that this extinct New Caledonian resident was not a member of the Megapodiidae (incubator birds), if it did not build these mounds than what or who did? Known bones are shaded white in the illustration above, bones not associated with known remains are shaded grey.  Previously, only the skull had been reconstructed, this robust bird probably fed on small animals including invertebrates.

The islands of New Caledonia in the south-west Pacific lie some 750 miles to the east of the coast of Queensland.  Dinosaur enthusiasts might remember that New Caledonia was the location chosen to shoot episode three of the ground-breaking BBC television series “Walking with Dinosaurs” that first aired back in 1999.  The exotic fauna of these tropical islands contains a number of unique trees and plants, that are descended from species that once existed on the super-continent Gondwana.  The isolation of the islands permitted several types of ancient flora to survive, for example the New Caledonia Pine (Araucaria columnaris) is descended from ancient trees once grazed by dinosaurs.  The islands became Oxfordshire in the Late Jurassic some 149 million years ago, for the purposes of episode three of the television series – “The Cruel Sea”.

The research, published in the on line journal PLOS One suggests that S. neocaledoniae is not closely related to megapodes, birds such as the Australian Brush Turkey (Alectura lathami) or the Malleefowl (Leipoa ocellata), it had feet more like a chicken than the feet of birds that construct large mounds of earth and vegetation which they then lay eggs in, relying on the mound to incubate the eggs. 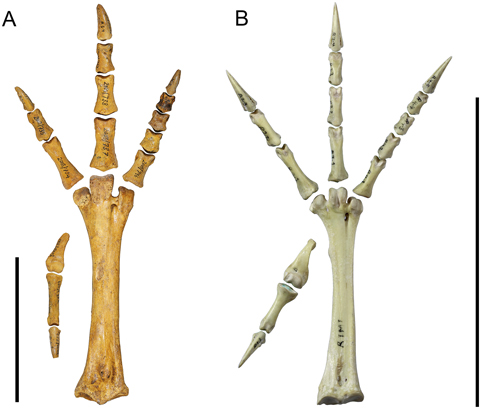 The two black bars are scale bars, each one equates to ten centimetres.  The foot of Sylviornis may have been much bigger than the extant Malleefowl, but the toes are proportionally much smaller, the claws less sharp and indeed, the pedal unguals (bones that make up the digits) are also proportionally smaller than that found in the Malleefowl.  The scientists conclude that these feet were not adapted to creating nesting mounds and that S. neocaledoniae probably incubated its eggs by sitting on the nest in the same way as Ostriches and Emus.

Commenting on the study, one of the authors of the scientific paper, Miyess Mitri (Flinders University) stated:

“I was privileged to study this amazing bird, whose large legs and tiny wings made it look like a turkey on steroids.  The tell-tale muscle scars showed that the muscles for the toes were weak and the claws were just like those of chickens — nothing like the mini-spades of mound-builders.”

A phylogenetic analysis using characteristics observed from more than 600 bones studied, suggests that the closest relative of Sylviornis neocaledoniae was Megavitiornis altirostris, colloquially known as the Noble Megapode, that was once resident on the island of Fiji some 850 miles east of New Caledonia.  Sadly, the flightless Megavitiornis seems to have suffered the same fate as Sylviornis, it too became extinct once humans settled on Fiji.  It is likely that both birds, believed to be from the same bird family as the chicken, were hunted to extinction because they tasted good and being flightless they would have been relatively easy to catch.

As for those strange heaps of earth, the research team suggest that they could have been caused by a phenomenon of natural erosion.