An Update on the Evolutionary History of the Tyrannosaurs

The Tyrannosaurs are perhaps the best known clade of dinosaur.  However, despite their popularity and the fact that dinosaurs such as Tyrannosaurus rex seem to be a source of endless fascination for most people, children especially, how these meat-eaters evolved into the giants of the Late Cretaceous remains a controversial area for most palaeontologists.  In the light of new fossil finds, Dr Steve Brusatte from the School of GeoSciences (Edinburgh University) and Associate Professor of Biology at Carthage College (Wisconsin), Thomas Carr, have re-assessed their earlier 2010 study and produced a new family tree that plots the evolution of the tyrannosaurs.

The Phylogenetic Analysis of the Tyrannosauroidea Picture credit: Scientific Reports with additional annotation by Everything Dinosaur

Evolutionary History of the Tyrannosaurs

More than half of all the tyrannosaurs known to science have been identified in the last ten years or so.  Everything Dinosaur has reported on many of these exciting discoveries within this blog for example, in 2011 we featured the discovery of Zhuchengtyrannus and in 2013 we discussed the implications of the discovery of Lythronax from western North America.  In 2014, we wrote an article about a very peculiar member of the Late Cretaceous tyrannosaur family – Qianzhousaurus sinensis.

To read more about the discovery of Zhuchengtyrannus: New Species of Tyrannosaur Announced.

To read about Lythronax: The “King of Gore”.

With new tyrannosaurs to include in the study, the researchers re-examined their tyrannosaur family tree that had been constructed using a dataset of morphological characteristics (parsimony analysis).  In addition, a new technique of assessing the probability of phylogenetic relationships between genera was applied, the first time such an analysis had been conducted on the Tyrannosauroidea – Baysian analysis.  This form of statistical analysis was first outlined by the 18th century English statistician Thomas Bayes (circa 1701 to 1761).  It involves a complex mathematical application that updates the probability of a relationship between characteristics based on the amount of evidence to support that inference available.

The diagram above illustrates the result of the parsimonious study.  The Baysian analysis produced a very similar result.  These two techniques reinforce the conclusions made by each.  In the scientific paper, the scientists argue that these methods provide a robust framework for interpreting the evolutionary history of the tyrannosaur family.  They conclude that the bauplan of the Late Cretaceous tyrannosaurs, those apex predators with their massive bodies, and huge heads, evolved in a piecemeal manner.  They also support the idea that Tyrannosaurus rex may have been an Asian migrant to Laramidia.  The most famous dinosaur of all, probably came from Asia, the ancestral line leading to the “tyrant lizard king” was not home grown in North America.

T. rex was an Immigrant from Asia – Chinese Takeaway Anyone? The T. rex replica (above) is a feathered tyrannosaur figure from the: CollectA Deluxe Prehistoric World Range.

In addition, this study suggests that the tyrannosaur family had a global distribution early in their evolutionary history and from the dataset, it seems that three distinct clusters of tyrannosaurs can be identified (numbers 1, 2 and 3 in the parsimonious analysis above).

1.   A basal clade of Proceratosauridae members – mostly small-bodied genera with elaborate cranial crests and a diverse global distribution in the Middle Jurassic to the Early Cretaceous.

2.  An intermediate cluster of mostly small to mid-sized genera, predominately from Asia, but with representatives in Europe and the United States (Late Jurassic to Early Cretaceous).

3.  A cluster of the large, apex, super-predators from the very Late Cretaceous that includes the Tyrannosauridae family and their closest relatives.

Filling in the Gaps in the Fossil Record

In addition, to providing an in-depth study of the existing fossil record, the paper’s authors reaffirm a fundamental problem restricting our understanding of the evolution of the most famous dinosaurs of all.  There are three distinct gaps in the Tyrannosauroidea fossil record.  If these three, very significant gaps get filled as more fossils are found then this would represent a huge step forward in our knowledge regarding the evolution of these dinosaurs.  They even may provide an opportunity to speculate more accurately on how this clade may have evolved should they have been fortunate to escape the end Cretaceous mass extinction event.

Where are the Three Gaps?

Oh for more from Appalachia!  Despite the wealth of tyrannosaur fossil material recovered from the land mass to the west of the Western Interior Seaway (Laramidia), very little is known about the tyrannosaurs that roamed the much larger landmass of Appalachia that lay to the east of this seaway.  Only two taxa have been described to date – Dryptosaurus and Appalachiosaurus.  It is very likely that many more different types of tyrannosaur roamed Appalachia, but questions remain unanswered.  Specifically, did the super-sized, tyrannosaurids only evolve on Laramidia and not Appalachia as well?  Did Appalachia become a sort of “lost world” a refuge for the more primitive tyrannosauroids such as Dryptosaurus and Appalachiosaurus?  In the absence of fossils, little is known about the meat-eating dinosaurs from Appalachia.

Secondly, there is a huge gap of at least 20 million years (perhaps 45 million years), between the intermediate second cluster which for the moment ends with Xiongguanlong and the large-bodied, later tyrannosaurs that were to dominate food chains in the Late Cretaceous and become the apex predators.

Xiongguanlong – A Big Gap in our Knowledge 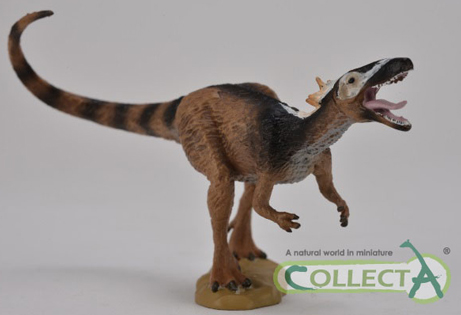 Xiongguanlong baimoensisa was a lightly-built, agile predator some five metres in length.  Its fossils are known from northern China (Gansu Province) but the strata from which the fossil material comes from has proved to be exceptionally difficult to date.

The model pictured above is from the: CollectA Prehistoric World Models.

Thirdly, current thinking suggests that there were many more tyrannosauroids from Late Cretaceous Asia than have been identified to date.  North America shows a high Campanian faunal stage diversity of tyrannosaurs, but in Asia all but one taxon is from the later Maastrichtian faunal stage.  It is very likely that there was a rich assemblage of Campanian tyrannosaurs in Asia too, but the fossil evidence has yet to be found.

Hopefully, in the next decade or so, more tyrannosaur fossil discoveries will be made, allowing scientists to “plug the gaps” when it comes to Tyrannosaurus rex and its relatives.

This article has been compiled from the following paper: