Reception Classes Get Creative with Dinosaurs

As Everything Dinosaur team members visit schools up and down the country delivering dinosaur workshops, they get to meet lots of teachers and it is always a pleasure to see the engaging and imaginative ways in which teaching teams are delivering the national curriculum.  Take for example, the two Reception classes at Higher Openshaw Community School (Manchester).  These two classes have been learning all about dinosaurs and other prehistoric animals this term.  A tour of the classrooms provided an insight into the highly creative and imaginative teaching activities that the children had been enjoying.  It seems even the playground had been taken over at one point as teachers, Miss Burke and Mrs Ashworth had made painted outlines of dinosaurs to help the children appreciate the size and scale of some prehistoric monsters. 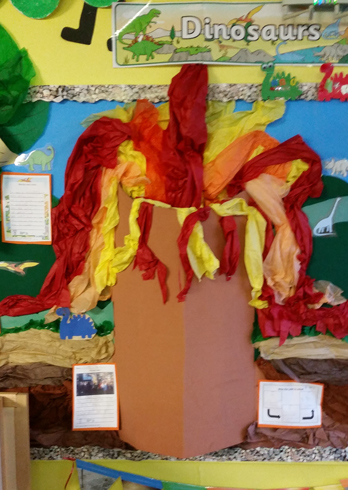 There were lots of examples of children’s writing on display in the well-organised classrooms.  There was even a special dinosaur exploration area to help the children understand more about life in the past.  As the term topic draws to a close, the Reception classes will be looking at extinction theories and during Everything Dinosaur’s visit, a number of the children were keen to point out that “a rock fell from the sky and killed all the dinosaurs”, well, these budding palaeontologists seem to have grasped the fundamentals of the extraterrestrial impact theory that’s for sure.

However, the teachers are keen to look at other extinction theories, such as the influence on our planet’s climate as a result of the massive amount of Late Cretaceous volcanic activity.  Hence the very colourful volcano display in Miss Burke’s classroom.  Coloured tissue paper makes great lava and the volcano provides a focal point, around which examples of the children’s hand-writing and independent research can be exhibited.

Some of the children have started to use examples of similes in their hand-writing exercises, this demonstrates excellent progress for Foundation Stage 2.  The children have obviously been as speedy as Velociraptors in picking up simile usage.

Dinosaurs as a term topic provides excellent opportunities to move the children gradually away from free flowing play activities to more structured formal learning, in preparation for the move up to Year 1.  The children had certainly been having a lot of fun, the scheme of work for this term topic had been skilfully crafted by the teachers with the able support of the enthusiastic teaching assistants.

Both classrooms had sand trays so that a mini-dinosaur excavation activity could be set up for the children.  Ms Saylaby explained that she had placed some real fossils into the sand so that the children could learn about how fossils form, where they are found and how they are excavated.  We supported this element, by letting the children handle real fossils during our workshop, some of which, as the children discovered, felt very cold and were really, really heavy! Real fossils and fossil models to explore in a sand tray activity.

Some of the fossils in the sand tray in Mrs Ashworth’s class are shown in the photograph above, the fossil expert from Everything Dinosaur explained how the fossils formed and which animals they represent.  There were some particularly nice examples of Gryphaea in the tray.  Gryphaea (graff-fee-ah) formed dense beds, very much like oysters today and they are common as fossils on the North Yorkshire and Cleveland coasts.  Palaeontologists can learn a lot from these fossils, as growth rings are often preserved on the fossilised shells.  They also suggest that these fossils formed in shallow seas, close to an ancient coastline.  The specimens in the tray date from the Jurassic.

The fossil models also seen  in the sand tray come from a set that we at Everything Dinosaur know very well.  This is the Ancient Fossils Set, which is from the: Safari Ltd. Prehistoric Animal Toob Range they are great for creative play.

Our dinosaur workshop and the extension activities provided will help the teaching team to round off the term topic.  Clearly, the children have really enjoyed all the activities and benefited from such an enriching learning environment that the hard-working staff at Higher Openshaw Community School have created.