The Acheivosaurs – Reinforcing Positive Learning Behaviours in EYFS and Year 1

A range of three inch (eight centimetre) tall soft toy dinosaurs is helping young learners to develop life skills.  The Achievosaurs teaching concept is reinforcing positive values in schools and Everything Dinosaur has lobbied hard to get these super dinosaur soft toys back into production.   Many children in the EYFS (Early Years Foundation Stage) and Year 1 are very familiar with dinosaurs such as Tyrannosaurus rex and Diplodocus.  The fascination for all things dinosaur can help motivate young learners and these dinosaur soft toys have proved to be a valuable teaching aid for educationalists.

The Achievosaurs – Super Soft Toy Dinosaurs for Use in Schools Some of the original “Achievosaurs”.

This range of “Itsy Bitsy” dinosaur soft toys help encourage children.  As these items are now back in production, Everything Dinosaur team members set out to examine how the “Achievosaurs” teaching concept came about.

Retired Bristol school teacher, Lori Mitchell got in touch with Everything Dinosaur and she explained how the idea for using dinosaur soft toys took shape.

To view the dinosaur soft toys available from Everything Dinosaur: Dinosaur Soft Toys.

Using a range of soft toy dinosaurs to help encourage young children to learn life skills and to reinforce positive values in schools is something Everything Dinosaur team members are very familiar with.  Now that the three inch plus dinosaur range known as the Itsy Bitsies are back in production, our team members set out to examine how one teaching concept, the “Achievosaurs,” came into being.

We were contacted by retired Bristol school teacher Lori Mitchell who explained to us how her idea for using dinosaur soft toys took shape.

The Achievosaurs (Dinosaur Soft Toys) in 2015 To view the dinosaur soft toys in stock at Everything Dinosaur: Dinosaur Soft Toys.

With the rigours of a new curriculum being rolled out across England, there is a great deal of emphasis placed upon preparing pupils for the opportunities, responsibilities and experiences of later life.  For example, the idea of introducing scientific working and the scientific method underpins a lot of Everything Dinosaur’s teaching activities in schools.  It is essential for those children at the Early Years Foundation Stage to acquire appropriate social skills as well as developing positive behaviours to help them make good progress.

We asked Lori, how the names of the first Achievosaurs came about and she explained that she based her prehistoric animal names on the specific learning qualities that she wanted to encourage in her Reception class (FS2).  For the last seven years of her working career, before taking early retirement, Lori was a teacher at Cadbury Heath Primary School, Warmley, near Bristol, South Gloucestershire (south-west England).  Using her experience, Lori devised a series of dinosaurs (plus one flying reptile), which she could use as props to help reinforce desired behaviours.

The names of Lori’s Achievosaurs were:

Over the years we have come across a number of variants, with something like 1,200 different dinosaur genera described to date and a new one being named on average every 20-30 days or so, educationalists certainly have plenty of scope.

When asked about how she came up with her Achievosaur names, Lori said:

“When I first drafted the idea, all the names ended in “asaurus,” but when I found the wonderful collection of Itsy Bitsy dinosaurs at Everything Dinosaur, my 20 year-old son got involved (dinosaurs really are any age child friendly), and selected the dinosaurs and adapted their name to “fit,” so, for example, we took Velociraptor to make “Askaraptor”.

Lori was invited to share her idea with a team of South Gloucestershire assessment co-ordinators and this simple, but very effective teaching aid has been taken up by a number of primary schools and other educational establishments.

Team members at Everything Dinosaur dedicate a lot of time to supporting teaching teams and many EYFS (Early Years Foundation Stage) and Key Stage 1 teachers incorporate a dinosaur themed topic into their scheme of work.  A spokesperson from the Cheshire based company stated that a topic based on prehistoric animals dove-tailed into desired learning outcomes across the curriculum, whether it was using the size and scale of dinosaurs to help build confidence with numbers or having a class imagine what it would be like to have a pet Triceratops in order to lay the foundations for some creative writing.

Dinosaurs as a Term Topic Can Encourage and Motivate Young Learners 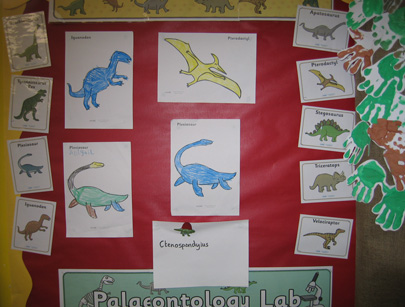 When asked why the likes of Tyrannosaurus rex and Stegosaurus are so popular with young learners Lori suggested:

“One reason I think is their wonderful names.  They sound fascinating, and what child doesn’t like to impress an adult by knowing long words and being able to pronounce them?  Another is that, although huge and terrifying when they lived, dinosaurs are not around anymore so they can’t get us!”

Dinosaurs enduring popularity with children (quite a few adults as well), is an area that has been explored frequently.  Team member, “Dinosaur Mike”, part of the company’s teaching team was interviewed by the BBC on this subject and he hypothesised:

“Dinosaurs are never really out of the media, so children are exposed to prehistoric animals such as Diplodocus and Tyrannosaurus rex from an early age.  When talking to Mums and Dads we know how proud they are when their son or daughter explains all about their favourite dinosaur.  With so many facts and figures associated with these prehistoric reptiles, they do help sow the seeds for an appreciation of life- long learning.”

Her Reception class loved the idea of Achievosaurs right from the start, but we wanted to know which was Lori’s own favourite.  Lori declared that she was very fond of them all as the encouragement these soft toys had given to her charges, getting them to think about learning skills and to develop positive behaviours, was of real benefit.

“It has been fantastic to hear the children identifying what they need to do in order to move their learning on, for example, suggesting they need to be a “Stickasaurus,” which concentrates, in order to learn their letters or a “Solveosaurus rex,” which makes links between ideas, when faced with a problem.  However, if I had to pick one favourite Achievosaur, I think it would be Tryatops”.

“There is sometimes a perception that learning is just for “clever” children, and I think Tryatops helps to teach children that no matter what the activity or skill level, we can ALL try our best, never give up and in consequence, achieve.”

Tryatops – Based on the Horned Dinosaur Triceratops

An excellent replica of a Triceratops.

Not being discouraged, even when experimental results don’t quite turn out as expected, is an important aspect of scientific working.  Lessons learned early in life will help pupils face future challenges with more confidence.

In conclusion, we asked Lori if she could design her very own dinosaur what would it be like?

“The Achievosaurs were my first design attempt, with specific characteristics and names, to tie in with the Early Years Characteristics of Effective Learning.  I had a lot of fun inventing and writing about them and I couldn’t be more delighted that other Early Years professionals and schools have found the concept useful.  However, I’ve recently been thinking about the PSE side of things [personal, social and emotional development]: could an Achievosaur help children to take account of one another’s ideas (an Early Learning Goal) or be thoughtful/helpful?  What about a Respectadocus?  Now that the toys are back in production, anything is possible! “

At Everything Dinosaur we have had the privilege of working with a number of dedicated teaching professionals who have adopted and adapted dinosaur soft toys to assist them with their own learning objectives.  As a result, we have come across a large number of different Achievosaurs all aimed at reinforcing appropriate behaviours and encouraging the development of life-long learning.

Thank you Lori for being a wonderful “Shareosaurus” and sharing your story with us.