A Review of the Papo Young Apatosaurus Dinosaur Model

New for 2015 and one of two new replicas in Papo’s prehistoric animal replica range (the other being the Tupuxuara pterosaur), is a model of a young Apatosaurus, part of a trend by the French manufacturer to depict juvenile versions of dinosaurs, after the introduction of the young Triceratops last year and what an amazing detailed Apatosaurus model it is.

Named back in 1877, Apatosaurus has had quite a makeover in the last few decades and it is pleasing to see that the design team at Papo have obviously reviewed the known fossil material and attempted to produce a modern interpretation of the dinosaur formerly known as Brontosaurus.  Here we have a heavy set animal, with hind limbs longer than the front legs, a deep chest, thick neck and a long, whip-like tail.  To learn more about this dinosaur’s name change, check out Everything Dinosaur’s article about how Apatosaurus got its name: Why Brontosaurus is no more.

Papo has earned a deserved reputation for the quality of the skin texture on its prehistoric animal models.  Once again, Papo have produced a beautifully sculpted dinosaur with lots of anatomical evidence inferred in the sculpt and some amazing skin details with wrinkles and folds clearly evident, even underneath the model as well, an area often overlooked in poorer quality dinosaur replicas. For many years the head of Apatosaurus was unknown and many museum exhibits depicted this dinosaur with a square, box-like skull reminiscent of another type of long-necked dinosaur whose fossils were also from Upper Jurassic aged deposits of the Western United States (Camarasaurus).  It was not until the late 1970’s that the skull of this dinosaur was formally described.  Apatosaurus had a skull very similar to that of Diplodocus.  It was rectangular in shape, with a blunt, square snout. The weak, peg-like teeth were only present in the front portion of the jaws. This Papo replica does a fine job at recreating the head as it is reflected in the fossil record.  When compared to the rest of this dinosaur’s body the head is extremely small.  The tiny nostrils are positioned on the top of the skull, again reflecting what most palaeontologists believe, they are present on the model, but such is the fine detail on this replica that they are best viewed using a magnifying glass. 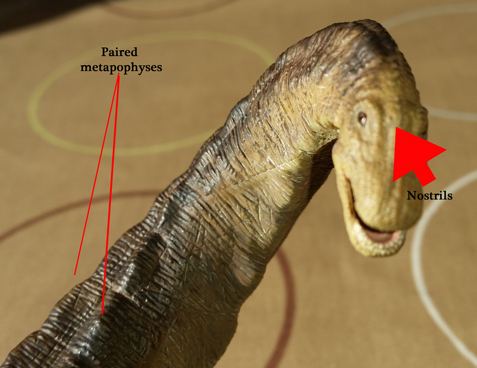 The neck of Apatosaurus was relatively short compared to the tail but much broader and thicker.  The bones in the neck, the cervical vertebrae, are much wider than they are long.  The neural spines along the top of the these bones were divided in two, what is termed bifurcation.  These formed fork-like processes technically referred to as paired metapophyses and they can be picked out in this Apatosaurus replica, which is very much to Papo’s credit.

In addition, viewed from the side, prominent bumps along the neck can also be seen, these mark the presence of immense cervical ribs that stuck out sideways in the neck bones of Apatosaurus.  By counting the bumps you can estimate the number of cervical vertebrae depicted in the model.  By our calculations the count comes up a couple short (should be fifteen, we think) and although the bumps are very conspicuous in the replica, obviously, whether or not these bumps would have been visible in the living animal is purely speculative.  Our guess is that with the neck being very strong and covered in sheaths of muscle, these lumps and bumps would not have been seen.  However, as they feature in the Papo replica, it does at least indicate that the French company has done some research into the characteristics of Apatosaurus neck bones.

The hands and feet of sauropods are unique amongst the vertebrates and again Papo is to be applauded for the details shown in their Apatosaurus model.  On the front feet, the hands, there are signs of five digits, although only one, the thumb has a claw.  The claw is particularly large and prominent, diplodocids like Apatosaurus did indeed have big, pronounced thumb claws.  The hands may have had a more column-like appearance and it might have been difficult to spot individual fingers, but we commend Papo for their efforts.

The feet are also well modelled, the stout and strong back legs end in hind feet that look very different from the “hands” of the Apatosaurus replica.  The back feet are larger than the hands and there are three claws to each foot, again there is much to be appreciated with this sculpt.

The tail is very long and very thin at the end.  The tail of Apatosaurus was indeed very long, it had some eighty plus tail bones.  The tail in the model is held off the ground (correct posture) and curved round on itself resembling a whip.  This is very typical of modern interpretations of the tails of diplodocids.  It may not have used the tail as a defensive weapon, however, by swishing the base of its tail, the tip would travel so fast that a supersonic cracking sound could have been produced.  This sound could have been used to communicate with other herd members or to deter predators.  Recently, it has been suggested that many of these types of long-necked dinosaurs possessed defensive spikes that ran down the back and along the tail, however, Papo have opted not to depict any spines or spikes on their Apatosaurus.

The Natural History Museums Depiction of a Spiky Diplodocid (Diplodocus)

Officially the model measures 37 centimetres but when that curved tail is taken into account this figure is something like 41 centimetres long.  We at Everything Dinosaur have been asked to comment on the age of this young Apatosaurus model.  There has been some work on growth and the potential ages of dinosaurs represented by Apatosaurus fossil material, (ontogenic studies) although the research is far from conclusive.  We like to think that the young Apatosaurus model is of a sub-adult, consider this replica as a teenage Apatosaurus.

All in all this is an excellent young Apatosaurus dinosaur model and it is a welcome addition to the Papo prehistoric animals range.