It has been a very busy few days for team members at Everything Dinosaur.  No sooner have we added the first of the new Schleich models for 2015 to our web store, then the Safari Ltd stock arrives.  Everything Dinosaur will be stocking all five of the new Safari Ltd replicas, including the 1:10 scale feathered Velociraptor model which is the only new Carnegie Collectibles dinosaur model for this year (Carnegie Collectibles Velociraptor).  Joining the very colourful Velociraptor will be four new replicas in the not-to-scale Wild Safari Dinos series, namely Archaeopteryx, Sauropelta, Nasutoceratops and a magnificent feathered Yutyrannus. Now available from Everything Dinosaur.

To view these new models and the rest of the Safari Ltd range stocked by Everything Dinosaur: Safari Ltd. Wild Safari Prehistoric World Figures.

Each of these new additions to our huge range of prehistoric animal models will be supplied with a fact sheet.  All our fact sheets are painstakingly researched and written by our own dinosaur experts, these fact sheets even include a scale drawing showing the size of that particular prehistoric animal.   The Archaeopteryx has plumage that reflects recent research into the potential colour of “ancient wing’s” feathers.

The Sauropelta model, represents one of the better known of the nodosaurids.  The long tail is very well crafted as is the bony armour and spikes.  At around eight metres in length, it would have been a very brave pack of Deinonychus that would have wanted to tackle one of these “living tanks”.

The Nasutoceratops, (the new horned dinosaur model), was actually smaller than Sauropelta.  Its fossils are also associated with the western United States (southern Utah) but it actually lived much later in the Cretaceous.  To read an article about the discovery of Nasutoceratops: Say Hello to “Large Nose Horned Face.”  It was a heavy, stocky herbivore, quite at home in the tropical habitat of the landmass known as Laramidia (Campanian faunal stage). 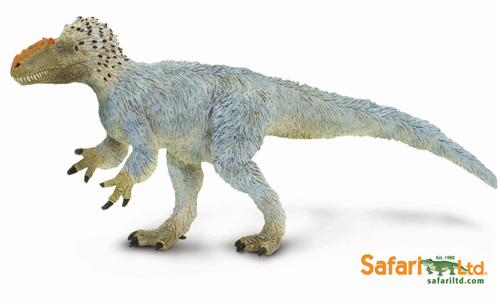 The shaggy coat of feathers are very well depicted on this dinosaur model.  To read an article about the naming and describing of this tyrannosaur from northern China: One Tonne Basal Tyrannosauroid.

A couple of months ago, we made a short video paying tribute to the new models being introduced in 2015 by Safari Ltd.  The video is our homage to the new Safari Ltd models (video is 37 seconds in length).

Paying Tribute to the New for 2015 Prehistoric Animal Models