Scientists announce the discovery of a new genus of bone-headed dinosaur.

The scene, the Late Cretaceous of the southern United States around 75 million years ago, a large herd of ceratopsians (horned dinosaurs) are migrating across a flood plain.  These huge herbivores kick up dust clouds as they lumber along and hidden in the dust the casual observer can get a glimpse of a small, bipedal dinosaur that darts in and out of the herd, stopping occasionally to pick at some flowers with its delicate beak, whilst all the time keeping a careful look out for predators.

This is the picture that emerges following the discovery of the skull cap of a new genus of pachycephalosaur (bone-headed dinosaur) by a palaeontologist on a working holiday in the Big Bend area of Texas.

The pachycephalosaurids were among the very last of the dinosaurs to evolve and flourish.  Earlier forms of these bone-headed ornithopods were no bigger than cats, but by the end of the Cretaceous some species have been estimated to have reached lengths in excess of 8 metres.  Little is known about these bizarre, bipedal herbivores with their huge, thick skulls, many of which were covered in ornamental lumps and bumps.  Few articulated fossils are known, however, the thick skull material has a relatively high preservation potential and a number of genera have been described based on skull remains.

Ironically, much of what we do know about these Late Cretaceous dinosaurs comes from excellent fossil material found in Alberta, Canada, close to where the Royal Tyrrell Museum is situated and it was a scientist from that museum on a working holiday in Texas that found evidence of a dog-sized Pachycephalosaur amongst a bone bed of ceratopsian dinosaurs.

Darren Tanke of the Royal Tyrrell Museum spotted an unusual rock amongst the bone bed debris whilst on a busman’s holiday to the Big Bend excavation site.  A second skull cap or dome was found at the site later.  The skull bones represent a new genus of small, pachycephalosaur, it has been formerly named and described – Texacephale langstoni.

Scientists have long puzzled over why these animals had such thick skulls, for example, Pachycephalosaurus wyomingensis, one of the largest genera had a skull that was over 20 cm thick.  The thick skull was not there to protect a large brain, the brains of these particular dinosaurs are no bigger than other ornithopods.  It has been suggested that the reinforced skulls helped these animals in butting contests to sort out social status and rank amongst the herd.  Some scientists believe that these animals head-butted each other like rams during the mating season, whilst others suggest that flank-butting and pushing matches may have been the order of the day.

Enter the “Boneheads”!  A new pachycephalosaur has been named and described.

“Whilst I was wandering around the horned dinosaur bone bed, I happened to look down and there was this odd-shaped rock sitting on the ground.  I just instinctively picked it up and when I turned it over I could see the impression of a brain-case on the underside.”

The diagram above shows two views of the skull cap or dome.  The top picture shows the skull as viewed from above (dorsal view), the picture below is a view from the side (lateral view).  The skull has been described as “peach sized” indicating an animal about 1 metre long.

This discovery will help researchers to understand more about the fauna of the Big Bend region of Texas during the Late Cretaceous, to date many of the dinosaur fossils found in this area tend to be very poorly preserved.  The robust skull bones of pachycephalosaurs as they are so thick, can survive the preservation process quite well and resist weathering once they are exposed on the surface.  A paper on the new genus of Pachycephalosaur has been published in the April edition of the scientific journal “Cretaceous Research”.  The lead author is Nicholas Longrich of Yale University.

An Illustration of a Pachycephalosaur Model 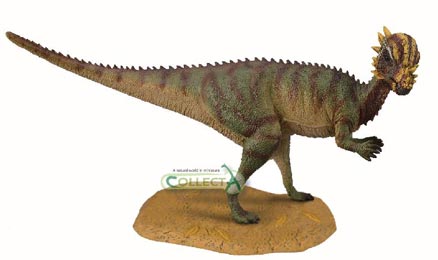 To view a model of a small pachycephalosaur and other dinosaur models: CollectA Age of Dinosaurs Prehistoric Life Models.

In addition, the discovery of this pachycephalosaur fossil seems to support a theory put forward by many North American scientists that the dinosaur fauna of Canada and the northern USA was very different from those dinosaurs found in Late Cretaceous southern USA.  Fossil evidence shows that there was a sort of ethnicity amongst dinosaurs, with northern genera distinct from their southern neighbours.

Commentating on this, lead author of the research paper Nicholas Longrich said:

“Instead of roaming across the North American continent, we see pockets of different dinosaurs that are pretty isolated from each other.  Every time we get good fossils from Texas, they end up looking very different from those to the north.”

The Yale University based research team hope to uncover more unique dinosaur fossils at the Big Bend site, hopefully more fossils from Texas will shed light on the ethnicity of dinosaurs.