Many remote and previously inaccessible locations around the world are slowly but surely being explored by scientists such as geologists and palaeontologists.  Geologists are often looking for new reserves of fossil fuels such as natural gas and oil.  Palaeontologists are on the look out for fossils that can help them piece together the story of life on Earth.

One such area being opened up and explored by scientists is Angola, after 30 years of civil war, the country is now stable enough to permit expeditions by various museums to some of the more inaccessible and difficult parts of that country’s terrain.

Those scientists who have the opportunity to explore this huge country that borders the Atlantic ocean to the west are not leaving disappointed.  The Cretaceous geology is providing them with an insight into marine life and also an opportunity to study the diversification of fauna after Africa began to split from South America (the break up of Gondwanaland).

Louis Jacobs, of the Southern Methodist University in Dallas, claims that this former Portuguese colony is “the final frontier for palaeontology”, he went on to state that in some parts of the country; “there are literally fossils sticking out of the rocks, it is like a museum in the ground”.

Such comments are intriguing many palaeontologists who are keen to learn more about the unique geology of this part of Africa and perhaps to assist with the discovery of new species of prehistoric animal.  A project to co-ordinate the exploration of some of the more remote parts of the country – “PaleoAngola” has run for several years.  One of this project’s biggest finds occurred in 2005, when five bones from the front left leg of a large sauropod dinosaur were found sticking out of a cliff at Iembe, around 40 miles to the north of the country’s capital and major city, Luanda.

Angola may be more famously associated with diamond mining than dinosaurs, but scientists expect that future excavations will uncover more dinosaur fossil remains, many of them species that are new to science.  During much of the Cretaceous, this area was part of a warm, shallow sea.  It teemed with life and fossils of marine turtles, plesiosaurs and mosasaurs have all be found in Angola.  A genus of mosasaur has even been named after the country (Angolasaurus).

According to Dr Octavio Mateus, (New Lisbon University), the fossilised bones of these sea creatures and the sauropod are just the beginning.

“We believe there are more dinosaurs to be found, we just need the facilities and means to dig for them.  Angola is amazing for fossils.  Some of the places here are the best in the world in terms of fossil [remains], we keep finding new animals so it is always exciting to be here”.

Will Angola One Day Have its Own Bespoke Dinosaur Museum? 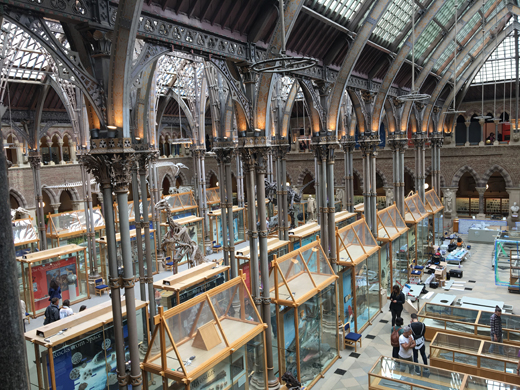 The spectacular Victorian ironwork of the Oxford University Museum of Natural History.  Perhaps Angola will have its own dinosaur gallery in its own national museum.  Picture credit: Everything Dinosaur.

Dr Mateus and his colleagues are confident that fossils from Angola will help scientists to understand the processes that took place as the super-continent of Gondwanaland began to break up in the middle of the Mesozoic.  The Atlantic Ocean had first begun to open in the Jurassic period.  This process continued into the Cretaceous, indeed the Atlantic still continues to widen today, at about the same speed as your finger nails grow.  The newly formed Atlantic connected with the western part of the ancient Tethys Ocean, whilst at the same time the eastern end of the Tethys began to close.  During the Cretaceous, animals could still migrate across countries such as Angola and reach South America, later in the Cretaceous these land bridges were flooded and animals (also plants) were isolated from each other.

By studying the fossils and geology of Angola, scientists hope to find fossils that can help them plot and trace the emergence of the Atlantic Ocean and its impact on global flora and fauna.