The next edition of the quarterly magazine “Prehistoric Times” is on its way to Everything Dinosaur.  This magazine will be arriving at our offices in the very near future.  The Editor, our chum and long-time collaborator Mike Fredericks, sent us an image of the front cover of the forthcoming issue (spring 2020 – issue number 133). The featured prehistoric animals are Triceratops and Tylosaurus, readers can expect an in-depth and up-to-date review on the science behind these inhabitants of the Late Cretaceous by Phil Hore.  Phil’s articles will be illustrated by lots of reader supplied artwork of “first horned face” and “protuberance lizard”.  The illustrations and drawings sent into the magazine are always a highlight.  On the subject of highlights, look out for an interview with renowned palaeontologist Robert Bakker by Tony Campagna.  We wonder what the interview will cover, perhaps a reassertion that the majority of the dinosaurs were endothermic (warm-blooded), or that the evolution of the angiosperms (flowering plants), was strongly influenced by herbivorous dinosaur feeding strategies?  Maybe, the debate about whether Tyrannosaurus rex was primarily a hunter or a scavenger will rear its head? 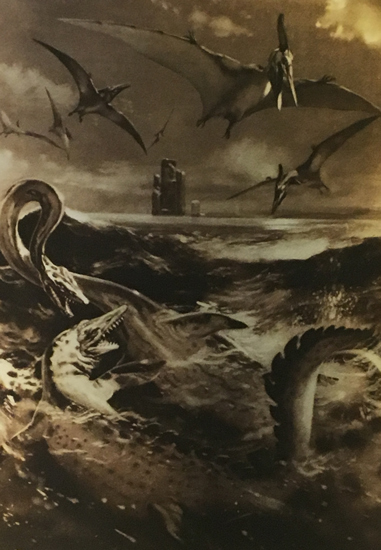 A dramatic scene from the Western Interior Seaway painted by Burian.  A Tylosaurus is shown in the foreground fighting with an elasmosaurid, whilst a flock of Pteranodon (P. longiceps) pterosaurs soar over their heads.  The next issue of “Prehistoric Times” will feature more artwork from Zdeněk Burian.

On the subject of Tylosaurus artwork, the front cover art featuring this marine reptile along with some teleosts was produced by the American artist Chuck Egnaczak.  The front cover illustration is most impressive, we really admire the little details such as the scars clearly visible on the tip of the jaw of the marine reptile and the way in which the fish have been painted to provide the illusion of rapid, fleeting movement.

Perhaps the palaeonews section will cover some of the news stories and articles that we have recently featured on this blog. Coming face to face with Triceratops.  This iconic Late Cretaceous dinosaur features in the next issue of “Prehistoric Times” magazine – issue 133.

Team members are looking forward to receiving their copy.  In these challenging and difficult times, it is great to have something to look forward to.