Recalling a recent visit to the Oxford Museum of Natural History which houses the fossilised remains of the first dinosaur to be described by scientists – Megalosaurus (M. bucklandii).  The display case features actual fossil material and casts of this nine-metre-long giant theropod from the Jurassic of Oxfordshire.  The specimens on show include most of the fossil material that William Buckland, in collaboration with the renowned French anatomist Georges Cuvier, used to confirm that these were the remains of a giant reptile. In the bottom left corner of the photograph that iconic lower jawbone can be seen, the display case contains the majority of the fossil material officially ascribed to the Megalosaurus genus.  In the lower centre is a drawing of the partial portion of a thighbone (distal end of the femur), that was illustrated in Robert Plot’s book “Natural History of Oxfordshire”, that was originally published back in 1677.  This fossil, sadly lost, had been found in a limestone quarry north of the city of Oxford (Middle Jurassic Taynton Limestone).  The concept of animals becoming extinct was not accepted thinking in the 17th Century so Plot, aware that the bone could not belong to any animal living in Oxfordshire, claimed that this partial thigh bone came from an elephant that had been brought to Britain by the Romans.

Later this illustration was used by the author Ricard Brookes (1763), he coined the phrase “scrotum humanum” and considered this fossil to represent the remains of a giant man.  It was not until 1824 that Megalosaurus was formally described, the first dinosaur to be so, although the Dinosauria was not erected until the early 1840’s. 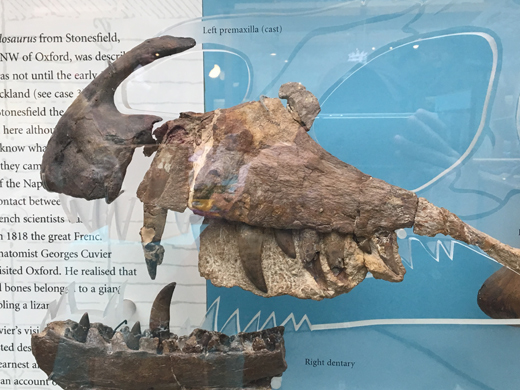 A view of the skull and jaw material associated with the first dinosaur to be scientifically described (Megalosaurus).  The left premaxilla is a cast.

A sequence of Megalosaurus footprints can be seen on the lawn in front of the Museum. Visitors can literally “walk in the footsteps of a dinosaur”.  This sixty-metre long trackway is comprised of tridactyl print casts, copies of the dinosaur tracks discovered at the Ardley Quarry site (Oxfordshire), in 1997.