A Quick Video Guide to the New CollectA Models (Part 1)

Yesterday, Everything Dinosaur published details of the first of the new for 2020 prehistoric animal figures from CollectA.  We have been asked by dinosaur model fans and collectors to publish more information about this exciting quartet of replicas.  As our studio, is now up and running, we thought it would be sensible to create a short video review, showing pictures of the models and providing a little more detail about each replica – sort of like putting some flesh on the bones of the dinosaurs.

The First Four Dinosaur Models from CollectA for 2020

In this short video review (duration 4 minutes 20 seconds), we discuss the four new figures in turn.  Starting with the 1:6 scale Protoceratops dinosaur model, with its articulated lower jaw.  We then move on and introduce the Deluxe Fukuisaurus model.  Fukuisaurus is known from Honshu Island (Japan) and is one of a number of Early Cretaceous vertebrates excavated from the famous Kitadani Dinosaur Quarry, in Fukui Prefecture, after which this ornithopod is named.  Fukuisaurus (pronounced Foo-kwee-sore-us), comes from the same bonebed – “Quarry bonebed I”, as the theropod Fukuiraptor, a model of which was introduced by CollectA in 2019.

Fans of Dinosaurs From Japan will Appreciate Fukuisaurus and Fukuiraptor The third prehistoric animal to be discussed is the dromaeosaurid Microraptor.  This dinosaur model is likely to become a real collector’s piece.  It has such a dynamic pose and the narrator provides a little more detail about this 1:6 scale figure and gives the model’s measurements. 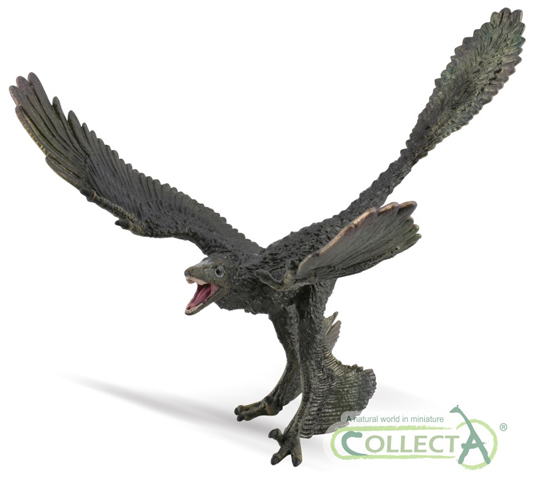 The CollectA Deluxe Microraptor model (1:6 scale).  Available from Everything Dinosaur in early 2020.

The fourth model to be discussed is the CollectA Prehistoric Life Baryonyx (B. walkeri) dinosaur model.  This is the only figure in the quartet not to be given a scale by CollectA.  It has been introduced to accompany the 1:40 Deluxe Baryonyx which was released by CollectA this year (2019).  In the short video review by Everything Dinosaur, the similarities between these two CollectA figures are highlighted. A comparison between the 2019 and the 2020 CollectA Baryonyx replicas.

All four of these new figures will be available from Everything Dinosaur in early 2020.