Don’t Get “Sniffy” About Dinosaur Sense of Smell

A team of scientists from University College Dublin have built upon the idea put forward in earlier research indicating that many dinosaurs such as Tyrannosaurus rex had an impressive sense of smell.  In a recently published paper, the scientists examined the sense of smell of a wide range of living and extinct archosaurs and concluded that many different dinosaurs had an excellent olfactory sense but the Tyrannosaurs probably had one of the keenest senses of smell amongst the Dinosauria. Up close to Tyrannosaurus rex.  It could smell you probably before it could see you.

The brains of long extinct animals, like most soft tissues, are poor candidates for fossilisation, the size and the shape of an extinct animal’s brain can be inferred by looking at how the skull bones knit together to form the brain case.  It is from this data that the size and the proportion of the brain dedicated to processing sensory data such as the sense of smell can be deduced.  It has been stated in the past that approximately 50% of the brain volume of a T. rex was made up of the olfactory bulb, that part of the brain that processes smells.  Furthermore, in most modern animals, the size of the brain’s olfactory bulb also correlates with how well they can identify odours.  Looking at the ratio between that part of the brain dedicated to processing smells and the size of the entire brain (the olfactory bulb ratio), can also provide evidence as to the ecological niche an animal is likely to have occupied in an ecosystem. Tyrannosaurs had a highly developed sense of smell.

For example, a bird that hunts in low light levels using scent to find food, is likely to have adapted to its environment very differently from that of a kestrel that hunts in daylight and uses its keen eyesight to spot its prey.

Writing in the journal “Proceedings of the Royal Society B”, Dr John Finarelli and his colleague Graham Hughes (University College Dublin), used the olfactory bulb ratio in living archosaurs (crocodiles and birds) to infer the strength of smell amongst dinosaurs.

Prior research has shown that the size of the olfactory bulb is related to the number of smell receptor genes in the DNA of a given animal and how much diversity they represent.  Taken together, it is called the olfactory repertoire. In this new study, the researchers used the olfactory repertoire of modern birds and an alligator to estimate the olfactory ability of several types of dinosaurs.  Based on this innovative research, the scientists concluded that T. rex probably had between 620 and 645 genes encoding its olfactory receptors, a gene count only slightly smaller than those in today’s chickens and domestic cats.  Closely related Tyrannosaurs such as Albertosaurus, also had substantial olfactory receptor gene counts.  Tyrannosaurs probably had the best sense of smell amongst the Dinosauria, this in turn can lead to inferences about how these theropods lived and behaved.

For example, Tyrannosaurs were probably able to “sniff out” prey from far away.  They were  able to track down the carcass of another dinosaur and scavenge the corpse.

The researchers hope that this new study will not get drawn into the “T. rex a hunter or a scavenger debate”, the authors stress that a good sense of smell has many other uses other than finding food.  Many animals use scent to mark and define territory, track down a mate, deter rivals and for intraspecific communication.  The University College Dublin scientists also highlighted a shift in scaling of olfactory bulb ratios to body size along the theropod lineage that led to the evolution of modern birds.  The researchers conclude that by combining morphological and genomic data, it can be demonstrated that, while genetic information for extinct taxa is forever lost, it is potentially feasible to investigate evolutionary trajectories in extinct animals.

Amongst Living Vertebrates, It is the Elephant that Tops the Table for the Most Olfactory Receptor Genes 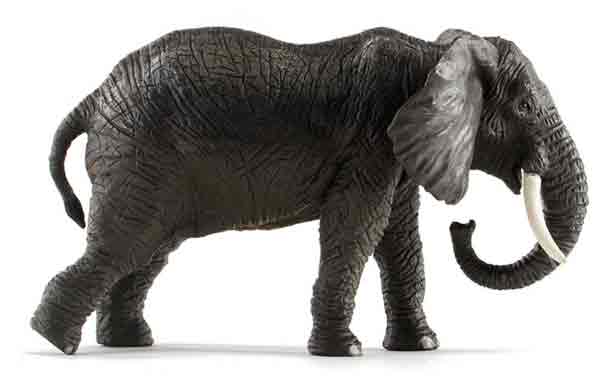 Amongst all living vertebrates, the record for the most olfactory receptor genes lies with the modern elephant, a herbivore with about 2,500 such genes.  With such an exquisite sense of smell, elephants can “count” quantities of food by odour alone.  The researchers looked at a number of different types of dinosaur in their study, sure enough, some plant-eating dinosaurs showed evidence of a greater reliance on smell than some carnivorous dinosaurs.  For example, the Late Cretaceous herbivore Erlikosaurus (E. andrewsi), a theropod but a member of the Therizinosauridae had a greater number of projected olfactory receptor genes than Velociraptor and other predatory dromaeosaurids. Olfactory bulb ratios amongst living and extinct archosaurs.  This new study confirmed earlier research indicating that the Tyrannosaurs had a powerful sense of smell.