Extinction of the “Siberian Unicorn” Caused by Climate Change

Elasmotherium Survived Until Around 36,000 Years Ago

The enormous rhinoceros Elasmotherium sibiricum, sometimes referred to as the “Siberian unicorn”, on account of its massive, single nose horn, survived until much more recently than previously thought.  In a new study, published in the academic journal “Nature Ecology and Evolution”, a team of international scientists conclude that E. sibiricum survived in eastern Europe and central Asia until at least 39,000 years ago.  It probably finally died out sometime around 36,000 years ago.  Furthermore, the study has resolved a long-standing debate amongst palaeontologists as to the taxonomic relationship of rhinos like Elasmotherium with their living, distant relatives.

A Life Reconstruction of Elasmotherium sibiricum A life reconstruction of Elasmotherium sibiricum.

Climate Change Led to the Demise of Elasmotherium

The research team which included scientists from the Oxford University, the University of New South Wales, Adelaide University, the London Natural History Museum, Groningen University (Holland) and the Russian Academy of Sciences, conclude that although, this more than three-tonne giant lived at the same time as Neanderthals as well as modern humans, hominins probably played very little part in its eventual demise and extinction.  Instead, it is likely that climate change, resulting in the reduction of the steppe (grasslands), on which this rhino grazed, led to the extinction of Elasmotherium.

One of the co-authors of the study, Professor Chris Turney, a climate scientist at the University of New South Wales stated:

“It is unlikely that the presence of humans was the cause of extinction.  The Siberian unicorn appears to have been badly hit by the start of the Ice Age in Eurasia when a precipitous fall in temperature led to an increase in the amount of frozen ground, reducing the tough, dry grasses it lived on and impacting populations over a vast region.”

The “Siberian Unicorn” May Have Persisted Until Around 36,000 Years Ago A Handful of Rhino Species Today

There are only a handful of rhinoceros species living today, all of which are faced with extinction.  The extant rhinos are just the remnants of a huge and very diverse sub-group of “odd-toed” hoofed mammals (Perissodactyla).  Elasmotherium is known from numerous fossils from China, Russia, Kazakhstan and Mongolia.  As part of the research, a genetic analysis of collagen extracted from Elasmotherium bones was undertaken.  The DNA data revealed that Elasmotherium was the last surviving member of a unique family of rhinos.

The DNA analysis showed that a divergence between the Elasmotherium and other rhino subfamilies started taking place in the Eocene Epoch (between 56 and 34 million years ago).

It had been thought that Elasmotherium became extinct around 200,000 B.C. well before the last Ice Age event in the northern hemisphere and many tens of thousands of years before the Late Quaternary megafaunal extinction event, which began around 130,000 years ago.  Radiocarbon dating of twenty-three individual specimens indicate that E. sibiricum survived in eastern Europe and central Asia until at least 39,000 years ago and possibly as late as 36,000 years ago.  Isotope data taken from fossil teeth indicate that this giant rhinoceros lived on the dry steppe and had a highly specialised diet, which probably contributed to its eventual extinction.  As the last surviving member of the Elasmotheriinae, the extinction of E. sibiricum marked the termination of this part of the Rhinoceros family tree.

Everything Dinosaur announced earlier this month that they would be stocking a 1:20 scale model of Elasmotherium sibiricum (CollectA Deluxe).

The CollectA Elasmotherium sibiricum Model Coming to Everything Dinosaur in 2019 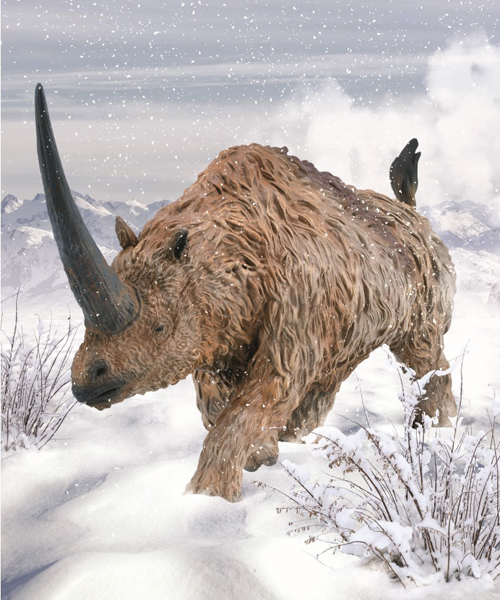 Everything Dinosaur acknowledges the assistance of a press release from the University of Adelaide in the compilation of this article.