Evidence of Insect Mimicry and Camouflage in Burmese Amber

Researchers from the China Agricultural University, the Nanjing Institute of Geology and Palaeontology and the Chinese Academy of Sciences, have discovered a new species of lacewing preserved in 100 million-year-old Burmese amber (burmite).  The scientists have identified two lacewing larvae that show adaptations for mimicking liverwort plants.  Mimicry and camouflage is relatively commonplace in the natural world, but evidence of this within the fossil record is extremely rare. Picture Credit: the Nanjing Institute of Geology and Palaeontology

Lacewings are insects which are characterised by their very fine, reticulated wings.  They are globally widespread and something like 2,000 living species have been described to date.  As larvae and adults, they are voracious hunters and are popular with farmers and growers as they eat lots of pests, such as aphids.  Fossils of these delicate insects are rare but specimens are known that date from the Jurassic.  Liverworts are much older, they lack a vascular system and true roots tending to grow very close to the ground.  Liverworts are thought to be similar to the very first land plants that evolved in the Silurian geological period.  Despite liverworts having existed since the Palaeozoic, mimicry between insects and liverworts is extremely rare in both modern and fossil ecosystems.  This discovery, reported in the academic journal “Current Biology” represents the first record of liverwort mimicry by fossil insects and brings to light an evolutionary novelty, both in terms of morphological specialisation as well as plant-insect interaction. 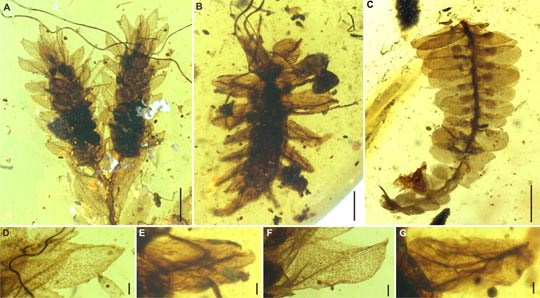 New green lacewing larva and potential model plants from Burmese amber. (B, E, G are larvae, the others are liverworts)

Picture Credit: the Nanjing Institute of Geology and Palaeontology

The larvae have broad flanges on their abdomen and thorax that resemble the fleshy, ribbon-like fronds of liverworts.  The insect which has been named Phyllochrysa huangi, is the only known species of lacewing with distinctive foliate lobes on the larval body.  These newly described insects are the first evidence of direct mimicry in lacewing larvae.  This camouflage may have helped the vulnerable larvae to avoid detection by predators, or they might have used this body bauplan to help ambush potential prey. A life reconstruction of two Phyllochrysa huangi hiding amongst liverworts.  The larvae are highlighted by red arrows.

The researchers conclude that these fossils preserved in amber demonstrate a hitherto unknown life-history strategy amongst these types of insect, a strategy that apparently evolved from a camouflaging ancestor but did not persist into modern times with this lineage.

A Hot and Humid Cretaceous Jungle

The amber from Burma (Myanmar) has provided palaeontologists with an astonishing insight into life in a Cretaceous tropical rainforest.  Numerous types of invertebrate have been named, including damselflies, spiders and blood-sucking ticks that may have fed on the blood of dinosaurs.  The remains of larger creatures have been found preserved in amber too, including the feathered tail of a dinosaur and a baby enantiornithine bird.

Dinosaur tail trapped in tree resin: The Tale of a Dinosaur Tail

The globally widespread extant liverworts consist of over 9,000 named species.  Although, like the lacewings, their fossil record is very poor, it seems likely that they began to become much more diverse during the Cretaceous as the rapidly evolving angiosperm trees provided new habitats for them.  Just like their modern counterparts, Cretaceous liverworts grew on the leaves and bark of trees as well as on other plant surfaces.  It is logical to assume that the camouflaged lacewing larvae also probably lived on trees which were densely covered by liverworts, with the lacewing’s liverwort mimicry aiding their survival.