Readers of Prehistoric Times magazine have voted the Wild Safari Prehistoric World Feathered T. rex model the best dinosaur toy of 2017.   The figure faced tough competition, but it had a number of factors in its favour.  Firstly, it is a model of a Tyrannosaurus rex, the most popular of all the prehistoric animals and secondly, this skilfully crafted replica depicted T. rex with a shaggy coat of feathers, a modern interpretation of this iconic dinosaur. Standing a little under fifteen centimetres high and measuring an impressive 32 centimetres long, this Tyrannosaurus rex figure depicts the “Tyrant Lizard King” with a coat of reddish-brown protofeathers, with more prominent quills on the top of the formidable skull and the running down the back of the neck.  The feathers on the back of the head and neck suggest that these quills might have played a role in visual display, the body feathers as shown in this replica, would have made a very effective coat, helping to keep this reptile warm.  The designers at Safari Ltd chose to make the snout and the underside of the neck bare, a similar characteristic is seen in extant vultures.  Many species of vultures such as the Lappet-faced (Torgos tracheliotos) and the White Rumped vulture (Gyps bengalensis) have heads and necks which are devoid of feathers.  A mistake often made, is to assume that this lack of feathers on the neck and head prevents the bird from getting caked in blood as it reaches inside carcasses to feed.  This adaptation may assist in helping the vulture to keep clean, but it is now known that the bare head and neck play a role in thermo-regulation, helping the bird to cool down.  Perhaps the design team at Safari Ltd had considered this research before finalising the feathery features on their 2017 dinosaur model. The back of the neck of the T. rex model has prominent feathers. 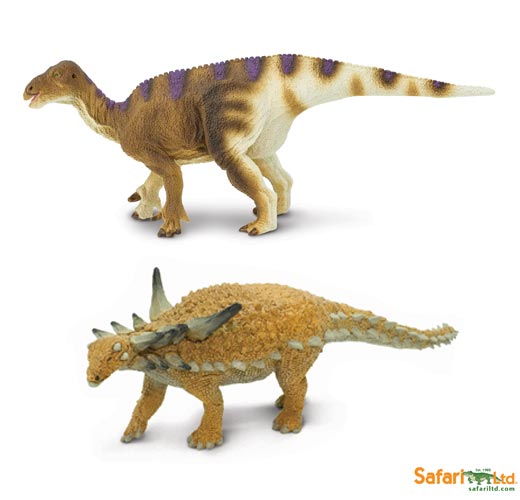 Previous award winners (top) the Iguanodon figure in 2016 and the Sauropelta, winner in 2015 (bottom).

It is the attention to detail that impresses.  This product line has a deserved reputation for the excellent painting of models, but it is the fine details that really make the feathered T. rex figure stand out from the pack.  Take, for example, the scratches and scars on the muzzle of the dinosaur model.  Face biting amongst Tyrannosaurs has long been suspected and the sculptors at Safari Ltd were keen to incorporate evidence of this behaviour into this T. rex model. Note the prominent scars on the muzzle of the T. rex figure (face biting).

“We congratulate Safari Ltd for winning the Prehistoric Times best dinosaur model of the year award for three years running.  Given the fantastic quality of prehistoric animal replicas available at the moment winning this hat-trick is some achievement.  The feathered T. rex model is truly spectacular and a worthy winner.”

The Artwork Depicting the Safari Ltd Feathered T. rex when it was Launched in 2017 The concept art linked with the 2017 launch of the T. rex model.